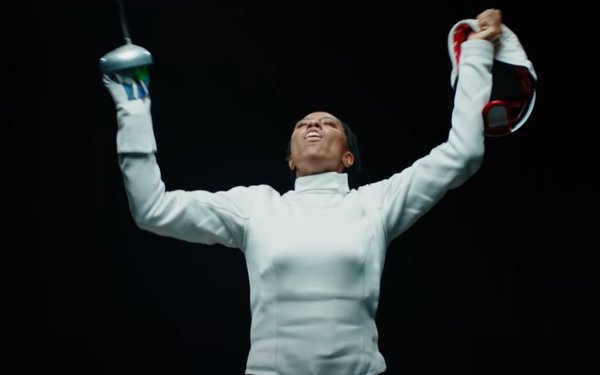 Created by Anomaly, it ends with the tagline, "Every body. Every athlete. Every season starts at Dick's."

The ad is running on major networks, including Olympics programming. And it features some athletes that may be recognizable to fans, including Aubree Munro, the catcher for the USA Softball Olympic team, and April Holmes, former Paralympian in track.

Olympics energy is key to the spot's timing. "We know many young girls and women will be tuning in over the next few weeks, especially with the incredible group of female athletes and role models participating," says Ed Plummer, Dick's CMO, in an email to Marketing Daily. "Our new ‘There She Is’ marketing campaign is a message of inspiration for all female athletes. We hope it elevates and empowers them."

The Pittsburgh-based retailer says it is extending the campaign to include local female athletes in stores across the country, honoring them with in-store signage.

Dick's is also supporting the effort with social media and a #ThereSheIs hashtag push, as well as email support and a landing page.

It's the latest addition to the retailer's commitment, announced last year, to invest more in girls' and women's sports, both on and off the field. That's included a $5 million grant to the U.S. Soccer Foundation's United for Girls initiative and a partnership with USA Softball.

Many brands, including Nike, have upped their commitment to young female athletes. But Dick's has taken the unusual step of highlighting feminism within the brand.

To mark International Women's Day in March, it released an "Inside Moves" campaign, spotlighting its women execs. That ad stars Dick's CEO Lauren Hobart, one of the few women CEOs in the U.S., along with numerous female marketing, product and administrative execs. "It's our job to get more women to the top of their game," she says.

Dick's has also donated some 100,000 bras to under-resourced female athletes so far this year and formed the Girls' Power Panel, with kids aged 13 to 17, to offer insights on product offerings.

*Correction: This story has been updated to credit singer Johnn Desmond.