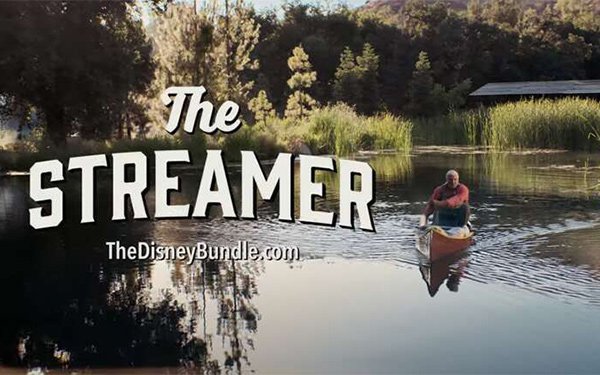 With Disney+’s U.S. subscriber growth having slowed significantly in recent months, Disney is unleashing a new marketing campaign for its streaming bundle that features “Guardians of the Galaxy”’s Dave Bautista.

But the company’s decision to tease fans by promoting a mysterious event dubbed “The Streamer” — which turned out to be a three-hour livestream of an actual stream in the wild — seems to have backfired with many fans.

The new account was initially content-free, but eventually got around to showing images of a waterway and promoting, with hashtag #DisneyBundle, a livestreamed event to take place at 3 pm PT.

The reveal of a one-minute ad with Bautista as the Disney Bundle’s new spokesperson, along with the three-hour, meant-to-be-punny livestream-of-a-stream, got poor reviews on social media.

Disney fans hoping for a reveal of big news — the types of announcements Disney usually saves for investor calls or presentations at Comic-Con — ”were left disappointed,” understated ComicBook.com.

One complained (in all caps): “3 hours! 3 hours of water flowing, for Dave [sic] Batista trying to get you to buy a service no one needs?”

Typical grouses from others:

“People thought something huge was gonna happen but they just wasted 3 hours for nothing” (followed by a crying emoji).

"I can confidently say this is the biggest disappointment I have ever experienced."

"When they have 3 hours of a livestream you expect at least something...this is just stupid and bad marketing."

“Pretty sure all this accomplished was making sure most people will never tune into another Disney+ livestream lol.”

As for the actual campaign video, it features Bautista paddling around on a stream and camping in the woods, emoting about how he’s “streamed every stream you can stream,” ranging from comedy to drama to sports. “There’s all kinds of streams out there, but there’s only one stream that has every stream you could ever want to stream," he continues. "It’s called the Disney Bundle…”

Bautista then explains the bundle deal — Disney+, ESPN+ and Hulu for $13.99 per month. Actually, that’s the deal for Hulu with ads; the bundle with ad-free Hulu goes for $19.99 per month.

Still, as of 8 am Wednesday morning, the promotional video was showing 3.2 million views on the Disney+ Twitter account, 2.3 million on @TheStreamer (which had 12,000 followers) and nearly 12,000 on YouTube.

"This was totally worth the time, why are you guys so mad?," posted one.