Why Advertising Is Poised To Become Amazon's Main Business 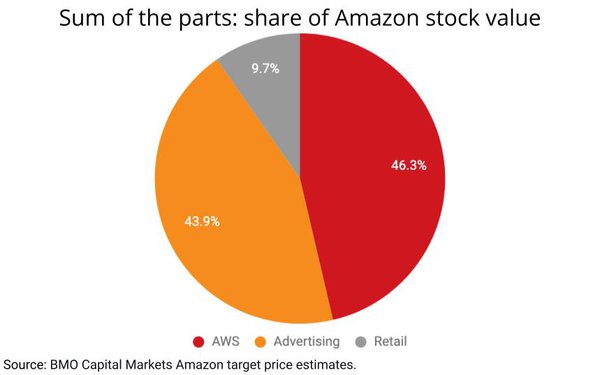 From a Wall Street analysts' point of view, Jeff Bezos couldn't have picked a better time to go into space.

No surprise there. What may be surprising is the surge in Amazon's advertising revenues -- up 80% -- which likely was fueled by many products and brands jumping on board in the past year to capitalize on the consumer shift to digital retail.

Ironically, Wall Street analysts now estimate that the shareholder value of Amazon's advertising business is worth nearly five times as much as its retail business, and is poised to overtake its AWS web-serving business as the most valuable part of the company.

Equally ironic, is that this is happening under the watch of new Amazon CEO Andy Jassy, who previously headed its AWS division.

While it's not surprising that the gold rush is on for Amazon's advertising sales -- one top Madison Avenue forecaster projects it could take in $30 billion in advertising revenues this year -- it represents part of a longer-term trend from conventional brand-building advertising to more performance-oriented ad spending designed to move some needles.

In fact, according to an analysis of Amazon ad spending by Jungle Scout, 77% of Amazon advertising is comprised of sponsored product ads vs. only 20% for brands (see data below).

On the upside, Jungle Scout does find a "noticeable shift in ad spend away from sponsored products to newer and recently updated ad products on Amazon," including sponsored brands and sponsored display formats.

"Sponsored display ads were first introduced in November 2019 and are continuing to gain popularity," Jungle Scout's 2021 Amazon Advertising Report notes, adding: "Meanwhile, sponsored brand ads underwent changes that have likely factored into their increased adoption. This ad product first began as a vendor-only tool and has been rolled out to a broader advertiser audience over time.

"Now, sponsored brand ads are available to anyone who has secured a brand registry and include more opportunity for placements. Historically sponsored brand ads only appeared at the top of search results and now can appear placed above, next to or within search results, meaning more opportunity to reach customers and probability for a higher [return on ad spending]." 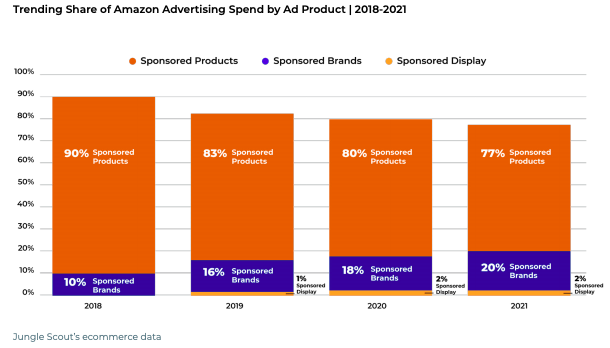