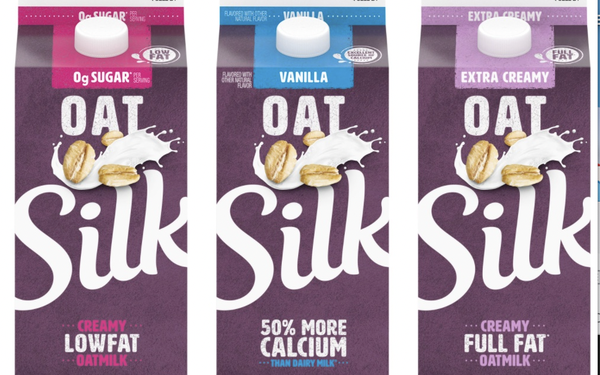 When it comes to milk, don’t count cows out just yet.

Yes, real milk consumption continues to decline each year—particularly low- and no-fat varieties, per the U.S. Department of Agriculture.

According to data from shopper marketing and insights platform AdAdapted, the rate at which consumers added traditional milk to their shopping lists has decreased 19% month over month so far in 2021.

Still, there are some bright spots—distant though they may be.

“There is still noticeable and growing demand for cow’s milk and dairy products with premium distinctions like local, grass-fed, hormone-free and organic,” research provider The Hartman Group noted in a report this month.

Meanwhile, the main disrupters of cow’s milk—including almond, soy and oat—reached 40% household penetration in 2020, according to IRI.

What’s taken so long for consumers to embrace milk substitutes?

As with meat alternatives, taste remains a major hurdle to consumer trial and adoption.

The same is true regarding the consumption of cow’s milk.

“Higher butterfat and better farming practices are difficult ideas to market, but they make a big difference in how milk tastes,” Dan Horan, CEO of New-York-based Five Acre Farms, told The Hartman Group.

“Taste and quality are scalable throughout the country. It’s the single greatest opportunity to stop the decline of the American family dairy farm.”

While soy is credited with spurring the milk-alternative category, it’s being wildly outgrown by the oat.

“Oat has become the new darling for plant-based milk substitutes,” Innova Market Insights said in a report this month. The Innova Database, which tracks new product launches, found that oat was the #1 base ingredient for milk-substitute products from January 2020 through March of this year.

In the 52 weeks ended May 29, there was a 33.8% increase in oat-milk-buying households, according to NielsenIQ.

This helps to explain why Danone North America’s Silk brand—which pioneered soy milk when Silk was owned by WhiteWave Inc.—is revving up its oat platform.

Launched in January of 2019, Silk’s Oat Yeah beverage was phased out a few months ago. In its place comes Silk Oatmilk.

“We feel that one of the reasons consumers are gravitating toward oat milk is it does have that creamy taste and texture that consumers are looking for,” says Silk vice president Derek Neeley.

In that regard, Oat Yeah didn’t quite make the grade. “It’s not just a packaging and marketing change,” Neeley says of Silk Oatmilk versus Oat Yeah. “It’s a ground-up reformulation.”

A new marketing campaign for Silk Oatmilk derives from tests in March of Silk Oatmilk and four other oat milk brands with 415 people in eight cities across four major U.S. regions.

According to Neeley, the taste tests were conducted based on standards from the American Society for Testing and Materials.

“In every single city and region, we came out on top,” he says. “This was a huge win for us.”

Silk is partnering with what it calls “fellow GOATS” on Facebook and Instagram to promote Silk Oatmilk as the greatest oat milk ever.