New research indicates that offering viewers a tiered structure that provides both ad-free and with-ads options may have the broadest appeal.

For its latest Monetization of Video study, completed in June, Hub Entertainment Research surveyed 1,607 U.S. broadband consumers ages 16 to 74 who watch a minimum of one hour of TV per week.

Asked to rank which options (not tied to specific brands) offer good or excellent value, free-with-ads and SVOD options were neck-and-neck, at 66% and 64%, respectively. 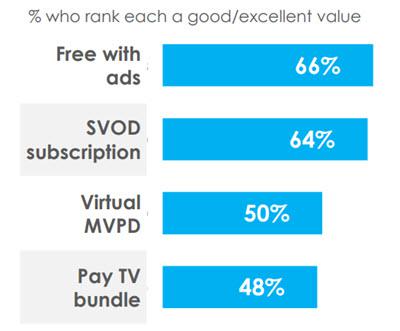 Probing deeper, one question involved dividing participants into two groups, with each group asked to choose from among three hypothetical streaming services with identical content.

Both groups were given two of the same options: a paid, no-ads service and a free service with ads in all programming.

Comparing the two groups, the tiered option pulled nearly twice the response of the limited-ads option: 36% versus 19%.

Within the group offered the limited-ads option, that option was much less popular (19%) than either the free-with-ads option (48%) or the paid with no ads option (33%).

Within the group with the tiered option, that option tied with the free-with-ads option (both 36%), and the paid, no-ads option came in third, at 28%. 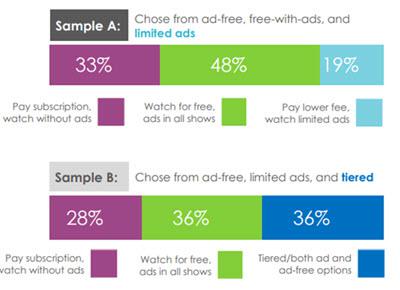 And while tiered offerings cannibalize some paid subscriptions, this survey indicates that they also deliver on attracting new users/subscribers.

Prior to the introduction of HBO Max’s ad-supported tier ($9.99 versus $14.99 for the ad-free tier), 39% of existing paid HBO Max subscribers said they would switch to the reduced-cost, with-ads option.

But more than one-quarter (27%) of respondents who weren’t Max subscribers said they would definitely or probably sign up for the new ad-supported tier. 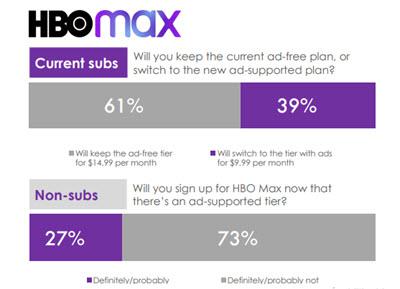 “It’s true that some TV viewers will do almost anything, including paying a premium, to avoid ads,” observed Jon Giegengack, principal at Hub and author of the study. “But there are many who will choose ad-supported TV if it saves money or lets them watch a show they can’t watch somewhere else. Tiered plans give viewers control of their experience. Whether they watch with ads or not, everyone is getting an experience they chose, and not one chosen for them.”

Looking at the cost factor, Hub found consumers closing the gap between what they feel is reasonable to pay for their total TV services and what they actually pay. The "reasonable" amount per month was very consistent across last year's survey and this year's: $72 and $73, respectively. But last year, consumers reported paying an average of $94 for all TV services, or $22 more than they considered reasonable, while this year, they reported paying $85, or just $12 over their reasonable amount.

The survey also indicates that aggregation presents an important opportunity for pay-TV providers to improve their perceived value, and perhaps stem some cord-cutting. 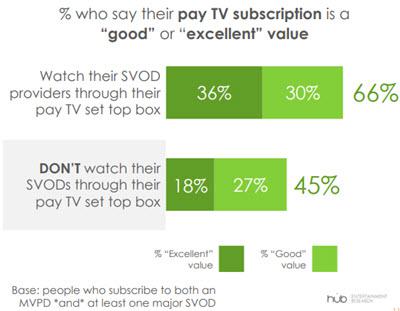 The study also offers some insight about how much of a draw Amazon Prime Video is for attracting Amazon Prime memberships.

Overall, among current Amazon Prime members surveyed, fully half said that the primary reason they signed up for the service was to get access to Prime Video content, and half said it was to get other benefits, such as two-day shipping.

The streaming content was even more important to the younger age segment, and in households with children: 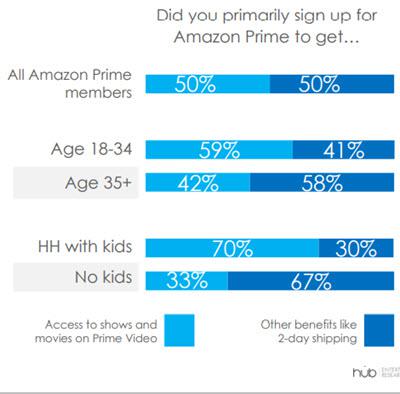 Given the high lifetime value of Amazon Prime members, is there any wonder that Amazon has become increasingly willing to pump up its investment in Prime Video content?