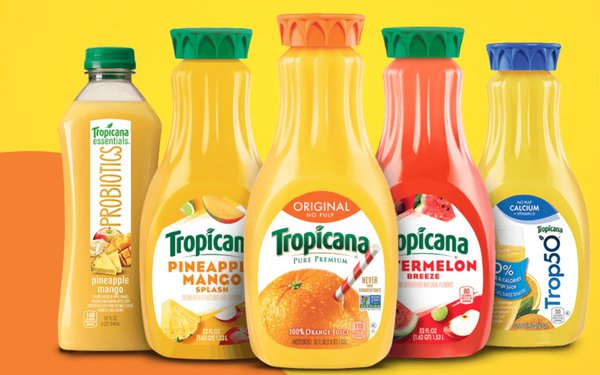 Too much sugar, not enough energy or profit.

PepsiCo will receive $3.3 billion for Tropicana, Naked and other unidentified juice brands in what the company described as a “portfolio optimization” in an announcement on Tuesday.

The sale price is exactly what PepsiCo paid when it acquired Tropicana from Seagram Co. in the summer of 1998.

“This deal makes good sense to us, as the company's juice portfolio is a margin-dilutive business, subject to increasing commodity headwinds,” investment banking firm Cowen analyst Vivien Azer wrote in a report yesterday.

Noting that refrigerated juice “has been a drag” on PepsiCo’s total U.S. beverage sales growth for the past four consecutive months, Azer said the sale proceeds will be used to reduce debt and invest in higher-margin businesses.

According to retail channels tracked by NielsenIQ, dollar sales of orange juice rose 13.7% in the 52 weeks ended July 24 compared to the same period a year ago. That followed a 16% increase in calendar 2020 and a decline of 4.8% in 2019.

Despite the sales growth, juices have been a very low priority for PepsiCo.

Over the company’s last four fiscal quarters, neither Tropicana nor Naked were mentioned when PepsiCo executives discussed financial performance with analysts—nor did the analysts ask about the brands.

To say that PepsiCo has been laser-focused on low-sugar and energy beverages would be an understatement.

“Clearly, non-sugar is growing very fast. I think we're very well-positioned from the R&D point of view and the innovation point of view on non-sugar,” chairman and CEO Ramone Laguarta said on a Q2 earnings call last month. “I think the Pepsi Zero solution or the Mountain Dew Zero solutions, those are extremely great-tasting products that are getting a lot of consumer favor.”

In energy drinks, PepsiCo has been expanding the distribution of Rockstar—which it acquired for just over $3 billion in 2020—while continuing its tumultuous relationship with Bang Energy.

Last fall, Bang’s owner, Vital Pharmaceuticals Inc., tried to sever its 2020 distribution agreement with PepsiCo. In December, an arbitrator ruled that PepsiCo would continue to distribute Bang per the original agreement until October of 2023.

PAI Partners’ holdings include R&R, which was Europe’s second-largest ice cream manufacturer upon its acquisition in 2013.

Under this week’s juice deal, PepsiCo gains 39% ownership of a new joint venture with PAI. It also retains exclusive U.S. distribution rights in its direct-store-distribution and foodservice channels for small format juice offerings. PAI will take over warehouse distribution in large-format offerings.