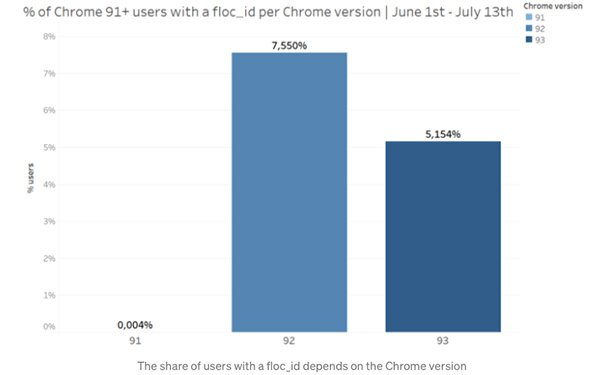 Google’s Privacy Sandbox aims to create a framework for advertising across the open web that respects the users’ privacy while enabling marketers to continue to provide ad-funded access to digital properties.

During the Origin Trial -- which was launched at the end of March 2021 and ended July 13 -- Criteo used its assets to understand what these FLoC audience cohorts mean and evaluate how well they work for the ad-tech industry to support performance-based advertising campaigns.

Criteo collected two pieces of information related to FLoC from June 1, 2021 to the end of the test:

With a month-and-a-half of data based on more than 16,000 advertiser websites and 2,000 publisher websites, Criteo wanted to understand what the cohorts built by FloC are -- and determine to what extent its customers could use them as a potentially viable alternative to third-party cookies.

Google announced that the initial testing of FLoC would take place with a small percentage of users in Australia, Brazil, Canada, India, Indonesia, Japan, Mexico, New Zealand, the Philippines and the U.S.

Small indeed, according to Antoine Rouzaud, data scientist at Criteo.

He wrote in a post that the volume of Google’s Origin Trial was about 0.02% of Chrome users, and really not representative of the global Chrome traffic, since it mainly runs on Beta and Dev Chrome versions.

“Even if we observed more than 33,000 FLoC cohorts, the volume of users within these cohorts is very small, making their interpretation challenging,” he wrote.

Why participate in the trial with Google? Joshua Koran, EVP of Data and Policy at Criteo, said the company wanted to ensure it had a part in defining a viable solution for improving web advertising, even from the early discussions around the possible deprecation of third-party cookies.

The company’s product and research and development teams are participating in the W3C discussions around building a viable alternative to cookies by advocating for improved solutions that support marketing.

During this Origin Trial, the company had two objectives. First, it wanted to understand the practical reality of FLoC beyond the theoretical specifications, which are not always as detailed and clear. Second, it wanted to investigate how well FLoC could meet the marketer and publisher business use-cases.

Google Chrome, as it turns out, is not the only browser generating FLoC cohorts.

The Yandex browser, which also is based on the open-source Chromium project, also creates FLoC cohorts. Its test represents 88% of Criteo’s advertiser events logged with a floc_id, predominantly from Russia.

And while Criteo is not participating in Yandex’s trial, Rouzaud believes Yandex is probably running a separate experiment that goes beyond Chrome’s experiment.

“Many FloC cohorts are generated by Yandex for users from other countries, i.e. not part of the OT list,” he wrote. “In total, only 12% of our advertiser events with a floc_id come from countries within the OT list and Chrome. The rest, represented by approximately 300,000 FLoC cohorts, come mostly from Russia and were generated with a floc_version named “chrome 1.0”, which is not the algorithm version tested by Google Chrome (version chrome 2.1).”

They might mention “chrome” in their floc_version, but all these cohorts were built by “browsers not running the actual FLoC algorithm that Google has described,” according to Google.

In Criteo’s test, it ignored these ‘chrome 1.0’ / Yandex FLoC versions when assessing the potential viability of the official Chrome solution: "Please note also that while the official Chrome Origin Trial ended, we still receive floc_ids from the Yandex browser."

“The Origin Trial was supposed to be an opportunity for the industry to familiarize themselves with the real feature in a real-world environment,” Rouzaud wrote. “While we were able to technically collect FLoC IDs, the test was vastly different from what we can expect as a final product. Indeed, being only available in dev versions of Chrome, FLoC’s volume remained extremely low and not representative of the general population, to the point that drawing any meaningful conclusion is a challenge: a challenge that we will take on in our next post.”