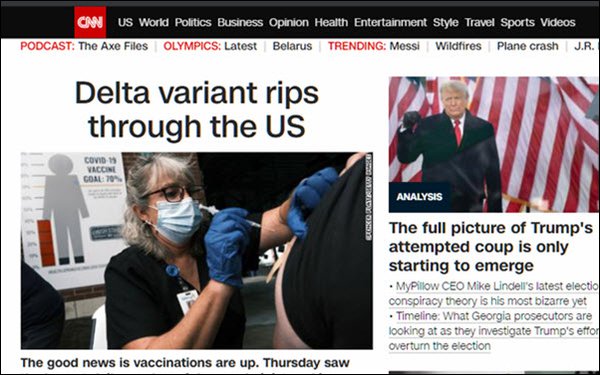 CNN on Thursday fired three employees who violated its policies by coming to work without being vaccinated against the coronavirus — one of the first public instances of such vaccination-related firings.

“In the past week, we have been made aware of three employees who were coming to the office unvaccinated. All three have been terminated,” Jeff Zucker, president of CNN, wrote in a memo to staff obtained by several media outlets, and first reported, via tweet, by a CNN media reporter. “Let me be clear — we have a zero-tolerance policy on this. “You need to be vaccinated to come to the office. And you need to be vaccinated to work in the field, with other employees, regardless of whether you enter an office or not.”

Zucker said that adherence had up to this point been based on the honor system, but the company may decide to begin requiring proof of vaccination to enter CNN buildings.

Zucker also said that mask-wearing will be mandatory in CNN’s Atlanta, Washington and Los Angeles offices, and assured workers who opt to wear them in offices where they are not mandatory that they need not fear “retaliation or judgment from co-workers,” according to Associated Press, one of the outlets that obtained the memo.

Returning to the office has been voluntary at CNN, and the company had planned an official return date of September 7. But it has now postponed the return, tentatively citing mid-October as a possibility.