Paint And Primer Take Their Love Story To TikTok 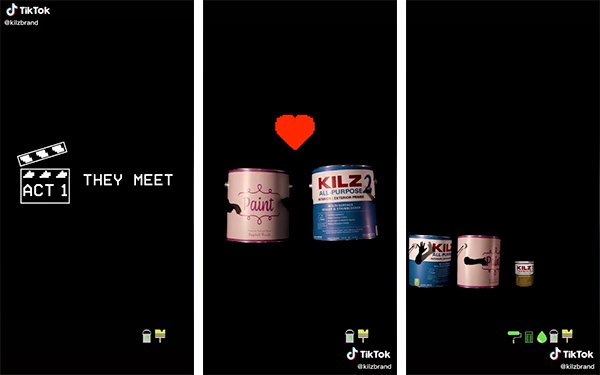 Early last year primer brand KILZ launched a new campaign encouraging younger do-it-yourselfers to use primer before they paint. Ads chronicled a “love affair” between a can of paint and a can of primer.

Now that love affair is being transported to TikTok and other channels in a new campaign, which like last year’s was created with ad shop Acrcana Academy.

The new work depicts the relationship between paint and primer and allows the execution to show the audience an ideal “relationship” with relevance, using whimsical imagery.

For TikTok the agency created life-sized paint and primer can costumes worn by actors who create real-time content on the platform with Paint and Primer simply behaving like any other couple on TikTok.

The characters dance, follow trends, create little skits, and generally use the platform as normal, human couples do.

Lee Walters, Executive Creative Director and co-founder of Arcana Academy explains, “We know that the audience’s attention span is very short. Once we had their attention we needed to communicate quickly and succinctly in order to have our information sink in. “

For Reddit, the agency extended the campaign to relevant subreddits like r/gaming, where the relationship between Paint and Primer was depicted as homage to the opening credits of the vintage Ms. Pacman video game with Paint and Primer mimicking the moves of Ms. Pacman and Pacman’s love affair.