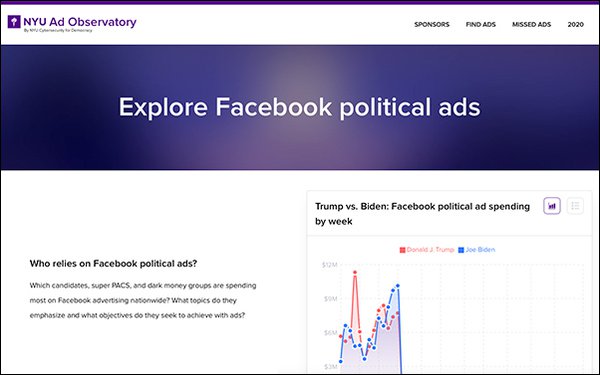 Three Senate Democrats are demanding answers from Facebook over its recent decision to effectively shut down New York University's  Ad Observatory project, which studied political ads on the platform.

“The opaque and unregulated online advertising platforms that social media companies maintain have allowed a hotbed of disinformation and consumer scams to proliferate, and we need to find solutions to those problems,” Senators Amy Klobuchar (Minnesota), Christopher Coons (Delaware) and Mark Warner (Virginia) say in a letter sent Monday to Facebook CEO Mark Zuckerberg.

“While we agree that Facebook must safeguard user privacy, it is similarly imperative that Facebook allow credible academic researchers and journalists like those involved in the Ad Observatory project to conduct independent research that will help illuminate how the company can better tackle misinformation, disinformation, and other harmful activity that is proliferating on its platforms,” the lawmakers add.

The NYU Ad Observatory relied on a downloadable browser extension to gather data related to political ads, including how they're targeted.

“The researchers gathered data by creating a browser extension that was programmed to evade our detection systems and scrape data such as usernames, ads, links to user profiles and “Why am I seeing this ad?” information, some of which is not publicly-viewable on Facebook,” Mike Clark, product management director, said last week in a blog post. “The extension also collected data about Facebook users who did not install it or consent to the collection.”

He added that the company shut down the project in order to comply with a Federal Trade Commission consent decree that requires Facebook to implement a privacy program.

“Had you honored your commitment to contact us in advance, we would have pointed out that the consent decree does not bar Facebook from creating exceptions for good-faith research in the public interest,” Levine said in a letter to Zuckerberg. “Indeed, the FTC supports efforts to shed light on opaque business practices, especially around surveillance-based advertising.”

Additionally, Mozilla, which had recommended the NYU Ad Observatory extension, publicly disputed the notion that the tool compromised privacy.

“It collects ads, targeting parameters and metadata associated with the ads,” Mozilla's Marshall Erwin said in a blog post last week. “It does not collect personal posts or information about your friends. And it does not compile a user profile on its servers.”

NYU researchers similarly denied that the extension collects information from users who haven't installed it.

Last October, Facebook sent the NYU researchers a cease-and-desist letter, arguing that the extension violated Facebook's policies against data scraping. That demand came soon after AdObservatory researchers reportedly found that Facebook had failed to label all political ads, according to Buzzfeed. At the time, NYU researcher Laura Edelson vowed to continue with the project, despite pressure from the social media platform.

The lawmakers are now asking Zuckerberg to answer a host of questions about the company's move, including whether Facebook plans to restore the Ad Observatory researchers’ access, in light of Levine's letter.

Klobuchar and the others are also asking Zuckerberg what evidence the company has that could suggest the tool exposed personal information of people who hadn't consented.

The lawmakers additionally are seeking other information surrounding Facebook's policies, including whether it disabled accounts of other researchers and journalists this year.

The senators have given Facebook until August 20 to respond to their questions.