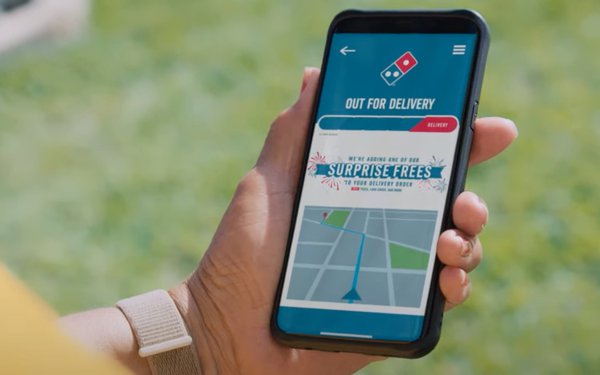 It’s being fronted by a campaign from the WorkInProgress agency to spread the word that the world’s largest pizza company is giving away $50 million in free menu items ordered online until Nov. 21.

Domino’s is one of very few major QSR players to shun third-party services like DoorDash and Grubhub, instead operating its own delivery platform with dedicated drivers. It’s an approach that gives Domino’s an advantage in pricing and logistics.

While not mentioning competitors by name, campaign spots feature a Domino’s worker standing on the roof of a home yelling about Surprise Frees via a megaphone.

“Other delivery apps add surprise fees,” she says. “At Domino’s we’re giving out surprise frees instead.”

“It’ll let them know that Domino’s is adding a Surprise Free to their order and they should keep an eye out for it,” Bulger tells Marketing Daily.

“The U.S. comp this quarter was driven by ticket growth due to increases in items per order and our transparent delivery fee, as well as the mix of products we sell,” Domino’s vice president/ corporate controller and treasurer Jessica Parrish told financial analysts on a July 22 earnings call.

CEO Rich Allison acknowledged that third-party delivery is here to stay. “And in fact in many ways, we look at that as our primary competitive set,” Allison said on the call.

Customers’ financial resources are a key part of the chain’s decision to keep delivery fees low.

“I think certainly to the extent that these third-party delivery fees get more complex and increase over time that less affluent customers are absolutely going to feel more of a pinch on that,” Allison explained.

A “big portion of the customers that we serve out there are not, you know, super wealthy folks, and value’s really, really important to them.”

According to data from App Annie, the top food and beverage apps by number of downloads in the first quarter of 2021 were DoorDash, Uber Eats, McDonald’s, Grubhub and Yelp.