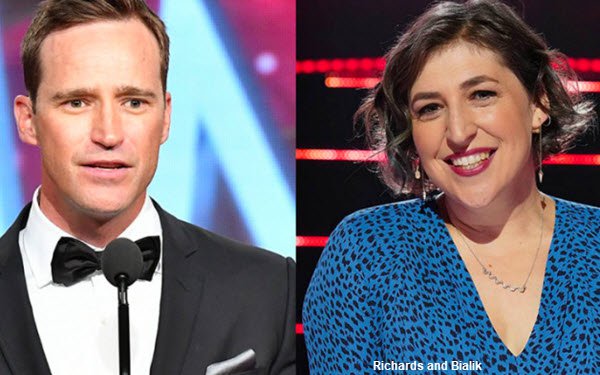 The millions of “Jeopardy” fans who have become testy of late over the elongated process of choosing a host to succeed the beloved Alex Trebek now have their answer.

Sony Pictures Television has announced that one of its own producers, Mike Richards, will host the syndicated version of the show, and actor Mayim Bialik will host its prime-time and spinoff series.

Both Richards and Bialik were among the numerous celebrities, sports stars, TV journalists and others who have served as temporary hosts for the long-running quiz show.

Sony “knew early on” that it wanted to divide the hosting responsibilities, and “it became very clear that Mike and Mayim were the undeniable choices,” he said. “They were both at the top of our research and analysis. Mike is a unique talent, at ease behind the podium and a double threat as producer and host. Mayim has a wonderful energy, an innate sense of the game, and an authentic curiosity that naturally represents the ‘Jeopardy!’ brand.”

While the split decision brings in a female host, some critics are already complaining that Sony blew an important opportunity to contribute to greater diversity in television by naming another white male to the syndicated host role.

In addition to his recent host stint on “Jeopardy!,” he previously acted as host for “The Pyramid” and “Beauty and the Geek.”

Bialik, best known for her role on “The Big Bang Theory,” which recently ended after 12 seasons, is also a neuroscientist — an accomplishment she is currently touting in commercials for Neuriva.