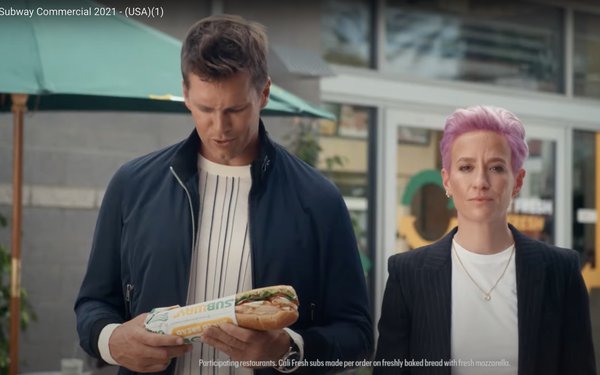 What’s the difference between refresh and just plain fresh?

That’s what some Subway restaurant franchisees are asking amid the controversy about the QSR chain’s spokesperson, soccer star Megan Rapinoe, kneeling during the U.S. national anthem at the Tokyo Olympics.

All of Subway’s more than 22,000 U.S. stores are owned and operated by franchise owners who pay the parent company a percentage of their revenue for advertising. Some franchisees are now urging the chain to pull any ads featuring Rapinoe.

"By knowingly hiring a flashpoint personality to represent the brand with our money, the franchisor has failed," one operator wrote in the private franchisee forum viewed by Business Insider.

A franchisee in Wisconsin found a sign posted to his door that read, "Boycott Subway until Subway fires the anti-American POS," as reported by The New York Post.

Brady and his connection to Subway have been called out by Sports Business Journal, which opined that footballer Brady—he of the strictest of diets—had never even entered a Subway restaurant.

Among the commercials in which Rapinoe appears are this spot in which Curry asks a sandwich-wielding Brady “Do you even eat bread?”

When research provider Pipslay surveyed 30,790 U.S. adults ages 18+ from Aug. 13-15 it found a mixed bag of sentiment about criticism of Subway related to Rapinoe’s Olympics protest of racial injustice.

Among the survey respondents, 38% agreed that protests against the chain are “justified,” compared to 36% who disagreed and 26% who were unsure.

Almost half (45%) of respondents said Subway should respect public sentiment and “give in to the pressure and drop Megan as the face of the brand” while 36% said the chain should respect her opinions, and 19% were unsure.

Gender-wise, 61% of male respondents felt the protest against Subway is justified by Rapinoe’s action, compared to 39% of women.

Marketing Daily reached out to a Subway rep for comment but had not heard back by deadline.

USA Today quoted Brad Simon, Subway's senior director of brand communications, thusly: "Megan is one of several athletes and celebrities Subway partners with, but they are not the official company spokesperson."

“The VS audience has a 0.41X affinity for Rapinoe, well below the national average in terms of overall affinity for the soccer star,” a Helixa rep tells Marketing Daily.