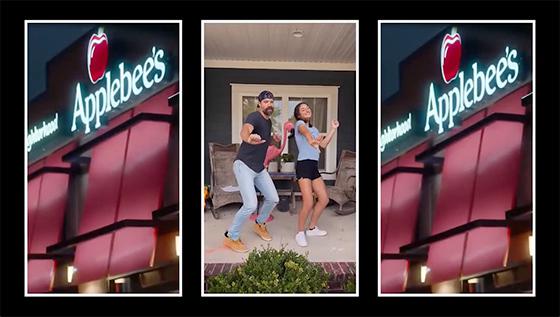 It seems as if there's no avoiding marketing efforts linked to TikTok these days. And why not, with a potential exposure to a billion or so users on the social platform?

This week restaurant chain Applebee's and its agency Grey got in on the action to take advantage of the chart-topping country hit “Fancy Like” becoming a TikTok trend. The song also happens to mention Applebee's in its lyrics—“fancy like Applebee’s on a date night.”

According to the restaurant chain, fans are doing the viral “Fancy Like” dance at Applebee’s restaurants across the country. And the song has racked up close to 30 million views on TikTok.

The song is from country singer Walker Hayes who has had more than a few Applebee's date nights over the years with his wife Laney and decided to commemorate those good times with the song.

The song also mentions the once and future Applebee's staple, the Oreo Cookie Shake, which the chain is now bringing back to its menu.

The company is launching two different commercials featuring Hayes’ song, along with videos of guests showing off their moves: Walker and his daughter, who helped choreograph the dance featured in the new ads.

“We’d like to congratulate Walker on the song of the summer,” said Joel Yashinsky, CMO at Applebee’s. “As soon as we heard ‘Fancy Like’ and saw the dance videos at our restaurants, we knew we had to showcase this viral sensation.”

Credit Applebee's and Grey with being quick to amplify a social media trend with good old-fashioned TV. With the song trending on TikTok combined with the new campaign, the company is expecting a lot more “Fancy Like” dancers and diners in the coming weeks.