Wendy's Goes All In On Breakfast Ads, Ghost Kitchens 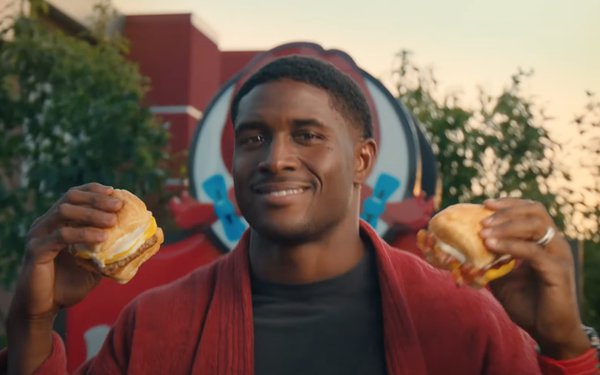 Image above:NFL's Reggie Bush is billed as a Wendy’s “Breakfast Superfan” in a recent spot.

Wendy’s will nearly double its breakfast-related advertising spending this year—to $25 million—as more people return to the workplace and schools prepare to reopen.

Simultaneously, the QSR chain has made a commitment to establish 700 franchised “ghost kitchens” to increase its presence primarily in dense, urban areas, in a deal with Reef Kitchens.

Wendy’s unveiled a new breakfast menu in March of 2020 just as the pandemic began to disrupt consumer eating/working habits and other QSRs pulled back on the morning daypart.

The chain had planned to spend $15 million to promote its breakfast offerings in 2021, but strong sales prompted an additional spend of $10 million.

In the second quarter ended July 4, breakfast sales rose 10% versus the first quarter—driven in part by a $1.99 honey butter chicken biscuit and two-items-for-$4 menu promotions.

“We continue to expect outsized growth during the breakfast daypart in the second half of 2021, driven by continued trial-driving programs and an expected return to routine in the fall,” Wendy’s president and CEO Todd Penegor said on an Aug. 11 earnings conference call.

Wendy’s hopes to grow breakfast revenue by 30% in 2021—with a goal of 10% of sales coming from breakfast by the end of 2022. In the second quarter, breakfast represented 7.2% of sales.

“And as we look at 2022, we're still committed to having about $15 million of support, which we've talked about previously from a company perspective,” Penegor added.

In terms of foot traffic, just 3.7% of Wendy’s customers visited one of its restaurants between six a.m. and 11 a.m. in the second quarter of 2019, according to Placer.ai. Last month, that percentage rose to 5.5%.

One of the chain’s most recent breakfast ads features former National Football League running back Reggie Bush—billed as a Wendy’s “Breakfast Superfan” in this 30-second spot.

On the ghost kitchen front, Wendy’s tested eight locations in Canada working with Reef beginning late last year, and has now committed to opening 700 in Canada, the United Kingdom and the United States.

Instead of constructing and staffing traditional restaurants, Reef operates kitchens in pods located in parking lots and garages.

“This commitment builds on the successful test that we completed in Canada and will allow us to further develop urban markets where we are currently underpenetrated,” said Penegor.