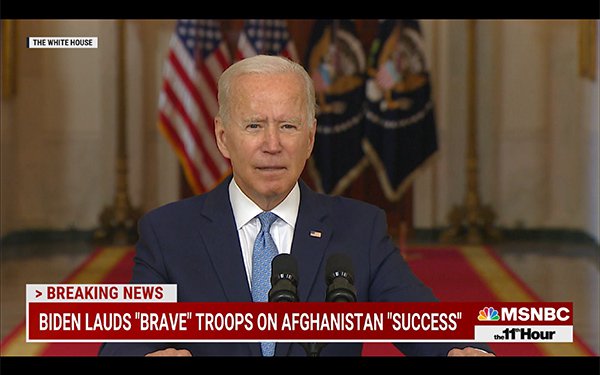 The big change that led to Fox’s upswing, according to analysts, was high interest in The Biden Administration’s recent decision to pull all U.S. troops out of Afghanistan by August 31.

President Biden announced a troop withdrawal on August 13, and it was completed on August 31.

Fox News Channel grew 16% to 2.47 million Nielsen-measured viewers in its live program-plus-same-day, time-shifted viewing metric for primetime versus the previous month. MSNBC was down 6% versus July to 1.23 million and CNN slipped 4% to 819,000 viewers.

All three networks are still down by double-digit percentages versus August 2020, due to a highly viewed and competitive presidential election race and keen viewer interest in ongoing COVID-19 pandemic issues.

Total day viewing moved along somewhat similar trend lines. Fox ended the month averaging 1.42 million in total day Monday-Sunday viewing, while MSNBC came in at 732,000 and CNN was at 621,000.