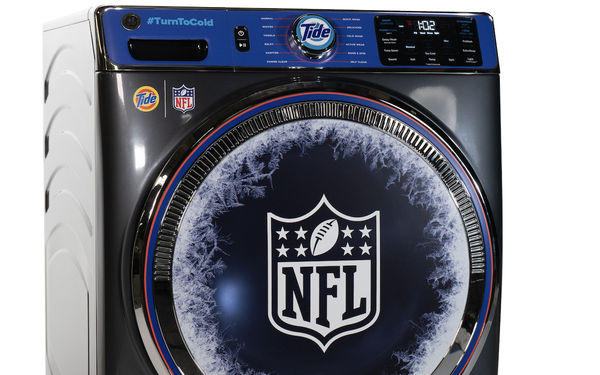 As part of a new push with the NFL to encourage cold-water washing, Tide has created only 10 units of the Tide Cold Washer, with each featuring the voice of a different NFL player (eight current, two retired) reminding users to wash in cold water. The washing machines, valued at $1,230 each, are being given out as prizes in a Tide sweepstakes running through Oct. 5.

Tide wouldn’t reveal what brand of washing machine it has customized for the promotion, nor rule out the possibility of making them available for consumer purchase some time in the future.

The sweeps is being promoted with a :39 YouTube “infomercial.”

Another element of the Tide NFL #TurnToCold campaign involves Ryan -- or Matty Ice, as Tide prefers to call him -- joining the brand’s “Cold Caller” crew of former pro wrestler "Stone Cold" Steve Austin and rapper/actor Ice-T. The latter two had already been appearing in commercials promoting cold-water washing, but a new :30 spot with the cold trio will premiere during NFL coverage on Sept. 12 and run through the end of the season.

The NFL partnership aims to further Tide’s goal to get three out of four laundry loads in the U.S. and Canada  done using cold water by 2030. The brand says not heating water in the washing cycle would reduce greenhouse gas emissions by 4.25 million metric tons over that period, or the equivalent of removing 1 million cars from the road for a year.

Tide has been the official laundry detergent of the NFL since 2012.