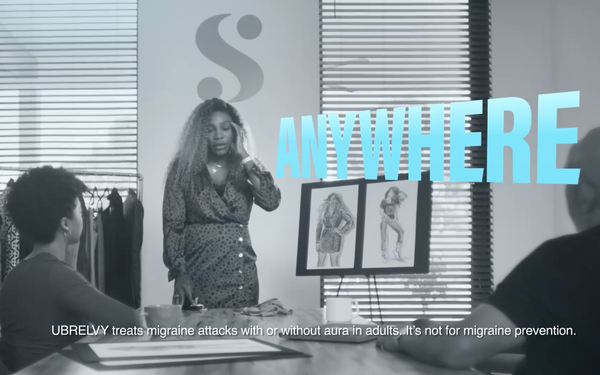 A migraine medicine commercial from AbbVie featuring Serena Williams was inspired by an actual migraine attack suffered by the tennis legend and fashion entrepreneur.

The spot, for Ubrelvy (ubrogepant), shows Williams going through the paces in a typical busy day with the help of the medication. Previously, Williams suffered from a migraine during an important business meeting and the pain was so intense that she had to walk out.

Williams, who opted not to play in this year's U.S. Open due to an injury, says she has dealt with the debilitating symptoms of migraine, a neurological disease, for most of her adult life.

By sharing her story, Williams aims to raise awareness of the treatment option that has brought her relief and encourage other individuals living with migraine to seek care, according to the company.

The new 30-second spot is running across national broadcast stations and can also be found on digital and social. The effort also includes a one minute and 39 second behind-the scenes video for the commercial shoot.

The prescription medicine has been available since January 2020.

Williams signed on as a spokesperson for the medication in August 2020.

She previously posted about using the drug on her social media.

Previously, Williams was shown in an 8-minute video talking with neurologist and paid AbbVie consultant, Dr. Jennifer McVige, about her experience with migraine and Ubrelvy.