'Kin' And Other TV Mob Dramas Are All Related 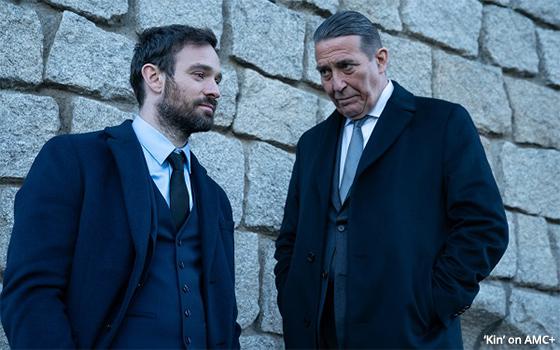 One thing I think I have learned from a lifetime of watching gangland movies and TV shows is that the mobster’s life is a terrible life to live.

The stress seems unbearable -- always worrying about bringing in enough cash to please the boss, having to beat up people who don’t pay, killing some of them and then worrying, presumably, about the police or reprisals from rival gangs.

And the hours? Forget about it. Collections, beatdowns, ambushes, murders -- these job responsibilities almost always ensure that you’ll be working nights. In the newspaper business, overnights were called “the lobster shift.” That’s no way to live!

The worst part of the gangster life must be the near-constant fear of getting murdered. From whence will the fatal shots come? A car driving slowly by on a dark street? A figure whose face cannot be seen under a hoodie walking unusually close to you? A solitary figure smoking a cigarette standing under a streetlamp gazing at your front door?

It must be enough to make a gangster never want to go out after dark, except for one thing -- that’s when he has to work!

These thoughts arise after watching the first episode of a new Irish mob series called “Kin,” premiering this week on AMC+.

This one concerns itself with criminal organizations working in Dublin, the capital of Ireland.

Certainly, Dublin is no New York, Chicago, L.A., Las Vegas or London -- all cities that have been featured prominently in the mobster-cinema pantheon.

But while Dublin might be a new one (or a rare one) for an organized-crime TV drama, the basic outline is more or less the same: Two factions, one more powerful than the other, are headed for a conflict.

The reason: The more powerful faction wants to monopolize Dublin’s illegal drug trade, and the other group -- a crime family named Kinsella -- does not want to participate.

So, to paraphrase Joe Pesci in “Casino” (1995): “When something like this happens, you know how things are going to work out. … You knew people were going to get clipped.” And so it goes here.

The title of the show, “Kin,” comes from Kinsella, but it also refers generally to the kinds of familial bonds that also characterize these mob TV shows and movies. Blood is thicker than water, apparently -- especially when it gets splattered all over the place.

Thus, the Kinsella family -- comprising various brothers, uncles, wives etc. -- is positioned as the underdog in this gang war. As a result, we are supposed to root for them, as opposed to the more corporate criminal organization, which nevertheless does have a family name -- Cunningham.

Whether or not anyone will actually root for the Kinsellas is up to each individual. Personally, I try to resist “rooting” for criminals, but like many others, I have found this temptation impossible to resist occasionally. “The Sopranos,” anyone? Who didn’t love Tony, right?

Speaking of which, I once heard David Chase, creator of “The Sopranos,” admit sometime after “The Sopranos” had ended its run that even after working on the show -- creating it, writing it, and producing it -- he still didn’t really understand what the real Mafia did or how it worked.

I suspect that this is fairly common among the creators, writers and producers of mob TV shows and movies (with the possible exception of Martin Scorsese).

For the most part, TV’s mob dramas are cut from similar cloth. They give the impression that they are more based on each other than on actual, real-life mob business and lifestyles.

This is known as poetic license. But at the same time, most of TV’s gangster dramas tend to look and sound alike after a while. And “Kin” is no exception.