AMC Goes Where Cinemas Have Never Gone Before: National TV 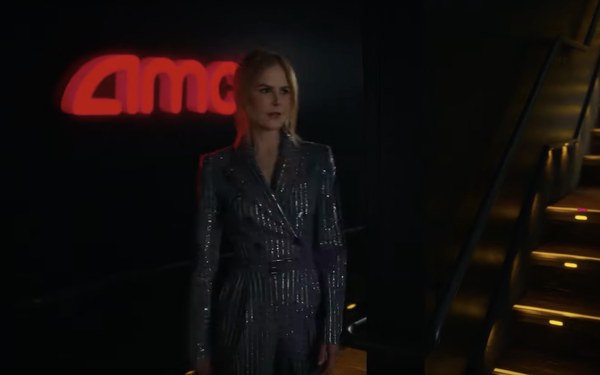 A day after announcing its highest-ever Labor Day weekend attendance despite the lingering virus, AMC Theatres -- the nation’s and world’s largest chain -- on Wednesday launched a $25 million+ campaign dubbed “the first national advertising program by a major theatrical exhibitor in the history of cinema.”

The campaign, coming in the wake of vast gains by streaming services during the pandemic, features Oscar-winning actress Nicole Kidman extolling “dazzling images on a huge silver screen.”

It launches today online and in social media, but the bulk of the buy will take place over network TV starting Sept. 12. The :60, :30 and :15 spots, from Kansas City’s Barkley agency, were directed by two-time Oscar nominee (for cinemtatography) Jeff Cronenweth and his brother Tim, and written by Oscar nominee ("Captain Philips") Billy Ray. The ads will also be shown  in AMC’S 600 U.S movie theaters starting later this month.

Movie marketing has traditionally been left to the studios, whose advertising for movies these days often simultaneously promote their own streaming services as viewing options.

Adam Aron, AMC’s chairman and CEO, noted  that “cinema operators have counted on others to undertake significant television advertising campaigns to drive audiences into our buildings. With all the change occurring in these uncharted waters in which we now navigate, we believe it is high time for an industry leader like AMC to go on television to remind today’s audiences of the magic that can only be found in a movie theatre.”

Indeed, more than 800,000 people saw a movie in AMC’s European and Middle Eastern theaters over this past weekend, on top of a hefty 2 million who attended U.S. AMC theaters.

AMC attributed the attendance surge to Marvel’s “Shang-Chi and the Legend of the 10 Rings,” which brought in a reported $90 million in revenues for its domestic opening weekend, approximately triple the previous Labor Day record: $30.6 million for the 2007 version of  “Halloween.”