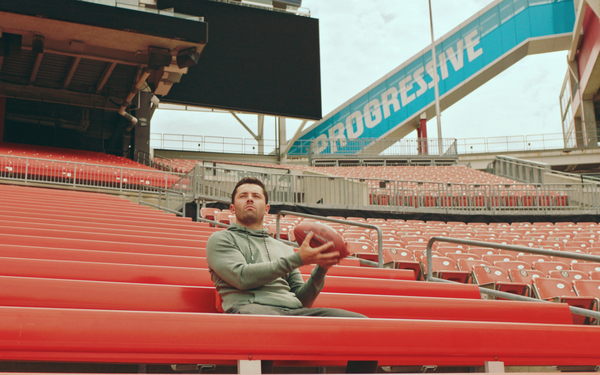 Progressive is bringing back its popular football-themed ads with Baker Mayfield living at the stadium for a third year.

Building on the success of the first two seasons, season three picks up with Mayfield navigating the realities of home ownership on his home (stadium) turf.

Mayfield is quarterback for the Cleveland Browns, not far from Progressive’s headquarters in Mayfield, Ohio.

This season will again provide glimpses of the mundane aspects of homeownership -- from running out of treats on Halloween, to handling a mis-delivered package that belongs to your neighbor (who in Baker’s case also happens to be a Rock and Roll Hall of Famer).

But today, after 540-plus days of living and working from home, the insight is even more relatable, making for an even stronger character connection, he says.

The campaign, from Arnold Worldwide, debuts Sept. 9 with "Baker Mayfield Shares Hot Goss" and “Baker Mayfield Holds A Yard Sale," and will run through the NFL playoffs. Eight spots total are planned, plus an additional eight pieces of digital creative.

"Because we know a lot can happen along the way, we intentionally captured a ton of great content -- and some special guests that I won't spoil the surprise on just yet -- that gives a lot of flexibility to produce extra ‘just-in-time’ and relevant creative,’" Charney says.

Characters in the spots are not wearing masks and there is no reference to the pandemic in the creative.

“The approach we've taken with this campaign is similar to all of our other creative: Provide release through humor,” Charney says. “We know masks are part of life, but we believe that people are still looking for a bit of escapism and normalcy through entertainment.”

Everyone off-screen was masked, and the cast and crew followed strict COVID-19 production guidelines set by SAG-AFTRA.

Although it's been six months since Charney’s "pre-tirement" announcement, nothing has changed in his day-to-day, he says.

"The work we've done over that time has put us in a great spot, and we've got incredible creative momentum going into 2022,” he says.