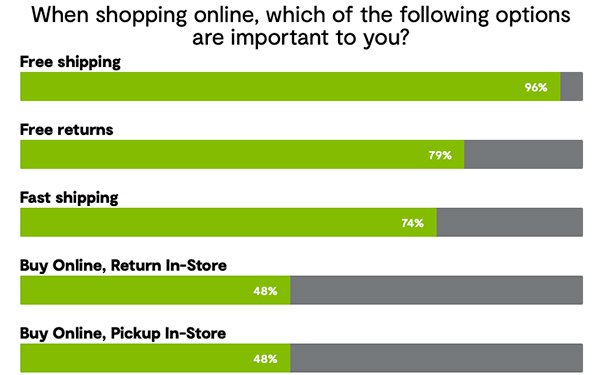 Data from the PowerReviews Consumer Survey: Returns in Retail in 2021 found 83% of consumers with incomes of more than $100,000 annually report that free returns are important vs. 75% of consumers with an annual income of $25,000.

Returns from online purchases are as common as they were prior to the COVID-19 pandemic. Some 88% of consumers report they make returns at least “occasionally.” This aligns with industry reporting that says returns were up 70% year-over-year in 2020.

When consumers were asked whether they return products purchased online more or less often than products you buy in-store, 47% said it is the same, while 33% said less, and 20% said more.

At 28%, GenZ were the most likely to say they returned items purchased online more frequently, and at 13% Boomers were the least likely to do so.

When comparing the frequency of returning items today vs. before the COVID-19 pandemic, 72% of consumers say they return online purchases at the same rate, while 15% said less and 13% said more.

Apparel, shoes, and electronics top the most-returned product categories. At 88%, clothing was the most common type of product that people returned. Shoes placed No. 2 at 44%, and electronics came in at No. 3 with 43%.

When asked which forms of UCG would make a consumer less likely to return products bought online if viewed them prior to purchasing, 70% cited ratings and reviews, while 68% said questions and answers, and 67% said images and videos.

UGC is the most influential format for younger shoppers. Some 82% of Gen Z agreed that viewing UGC imagery prior to purchasing a product online would make them less likely to return it. Millennials were next at 73%, while Gen X came in at 61%, and Boomers at 51%.