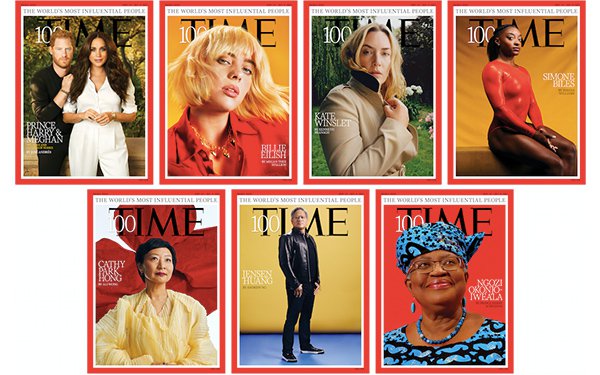 Time has unveiled its 2021 Time100 list of what it calls the most influential people on the planet, including 54 women and 10 climate leaders.

Prince Harry and Meghan, the Duke and Duchess of Sussex

Is anyone missing from the list of covers? Yes, Joe Biden And Kamala Harris? Not to worry: They — and others — are featured in profiles by guest contributors:

José Andrés on Prince Harry and Meghan, The Duke and Duchess of Sussex,

Nancy Gibbs writes of Donald Trump: “Trump’s assault on the Justice Department, his extortion of foreign allies, his obsession with domestic enemies, all rhyme with Nixonian villainy and go further…. Trump celebrates participants in the Jan. 6 insurrection as patriots, and runs to get another can of gasoline. Although he has left office, he remains a magnetic force, propelling others who have taken up his anti-democratic mantle and challenged the validity of our elections.”

"I find reason for optimism... in our 18th annual Time 100 list of the world’s most influential people,” writes Time CEO-editor in chief Edward Felsenthal. “It features extraordinary leaders from around the world working to build a better future, from entertainers striving to make Hollywood more inclusive to activists fighting for sustainability and human rights. ... They are disrupters, fixers, doers, iconoclasts, problemsolvers — people who in a year of crisis have leaped into the fray.”