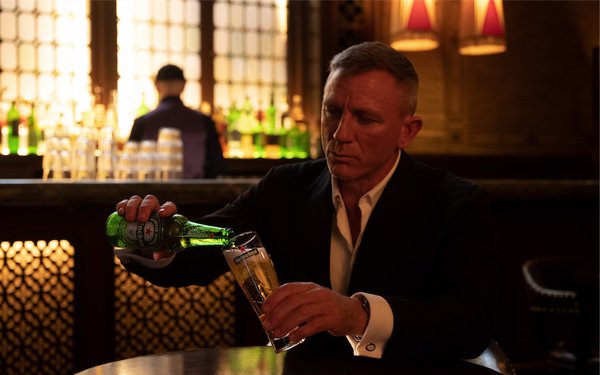 In the movies, Daniel Craig’s James Bond drinks vodka martinis, “shaken, not stirred.” In a new TV spot, though, Craig himself drinks Heineken, saying it’s “worth the wait.”

The Publicis-created spot, out now, is tied to the upcoming release (Oct. 8 in the U.S.) of “No Time To Die,” the first Bond film in five years, which Heineken says is also “worth the wait.”

To back up the claim about its beer, however, Heineken gave the brand to 115 people at intervals between 0-30 minutes, finding that those who waited 20 minutes had the highest satisfaction levels.

“The findings show that waiting may not be a bad thing,” declared Daria A Bakina, PhD, social psychologist and research director at Edelman Data & Intelligence.

Heineken has been a partner with the Bond franchise for 24 years, since 1997.

But what about those vodka martinis?

Smirnoff Vodka’s relationship with the 25-film Bond franchise goes back yet another 25 years, to Sean Connery’s first appearance as the spy in 1962’s “Dr. No.” Agent 007 has been drinking "shaken, not stirred" martinis, presumably with Smirnoff, ever since, and will do so again in “No Time to Die.”

Smirnoff, too, has launched an ad campaign tied to the new film, but there’s no Bond in sight. Instead, three 72&Sunny-created spots, titled “There’s a Spy in Everyone,” feature everyday folk who use “their inner spy to solve unique sets of circumstances.”

Under Smirnoff’s new inclusivity theme of “Vodka for the People,” each commercial starts by declaring that the protagonists -- Jessica, Samantha and Julio -- are not “double-0 agents.” But, respectively, “she did assume a false identity to use her neighbor’s WiFi, and blamed it on a mother-in-law she doesn’t have,” “she did fabricate a story about leaving the country to get out of a gym membership," and “he did flee to the Swiss Alps to avoid a team-building seminar, and was last seen wearing a tuxedo under his ski suit.”

The spots all end with another declaration: Each character’s “drink of choice” is a “Smirnoff Vodka martini. Shaken, not stirred.”

Smirnoff is also pushing its flagship No. 21 in 2021 through another high-profile sponsorship -- as one of Diageo’s first-ever official spirits of the NFL.

The first NFL-themed commercial spotlights actor Anthony Anderson making game-day cocktails with his mom. It's also one of two spots, the other featuring actor Kaley Cuoco, in the “Vodka for the People” campaign that promises to “Give the People What They Want!”

All five of the new Smirnoff spots mentioned above feature women and/or people of color. And, as part of the “Vodka for the People” theme, the brand has centralized its charitable endeavors, “specifically those with a strong focus on diversity and inclusion,” under a new "Smirnoff for the People Fund" banner. Smirnoff noted that it has committed hundreds of thousands of dollars in recent years to such organizations as The Phluid Project, Transgender Law Center and Black Girl Ventures.