At-Home Time Spent Watching TV, Movies Up 4% In 1H, But Spending Down 1% 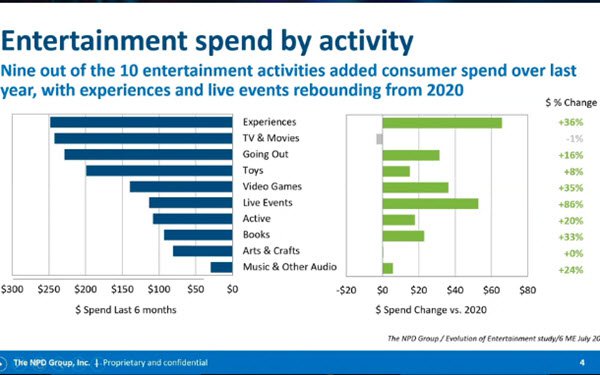 U.S. consumers’ reported time spent on watching TV shows and movies at home in the U.S. in 2021’s first half rose 4% year-over-year, to account for 30% of the total time spent on entertainment activities during the period, according to The NPD Group's Entertainment Outlook 2021 report.

However, screen-entertainment was the only one of the categories analyzed to see spending decline (chart above) -- down by 1% (or $20) YoY, to about $240, in part due to being compared to a major spending surge in the category during the pandemic lockdowns of 2020's second quarter, and in part due to time and spending shifting back to out-of-home experiences.

Due to the pandemic, viewing on TV, including streaming, reached a "false peak" in 2020, says John Buffone, connected intelligence and media entertainment industry analyst for NPD. And while viewership is still significantly above 2019 levels, it has begun a slow decline.

But SVOD engagement has pulled back as consumers spend more time on travel, eating out and other out-of-home activities. Time spent on “experiences” rose 104% YoY in the first half.

"The hyper-growth streaming era is turning into a competition for share of viewers' time, making content more valuable," he says. "Looking ahead, the mandate for the industry is to retain viewer engagement and win the battle for share of viewers’ time. As consumers migrate back to experiential activities, the available time to engage in watching TV shows and movies will naturally decline.”

As SVOD services proliferated, subscriber switching also rose in this year's first half, with nearly one quarter reporting having started or restarted a streaming service during the period -- and the most active switching seen among younger consumers. 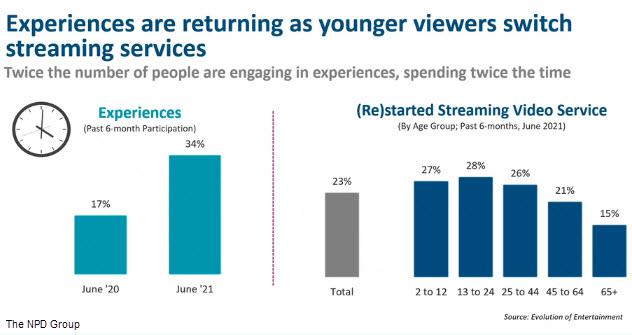 Older consumers without children generate less SVOD churn, but they aren't watching as much TV now as a year ago; and households with kids are more prone to churn based on trials, promotions and content considerations. 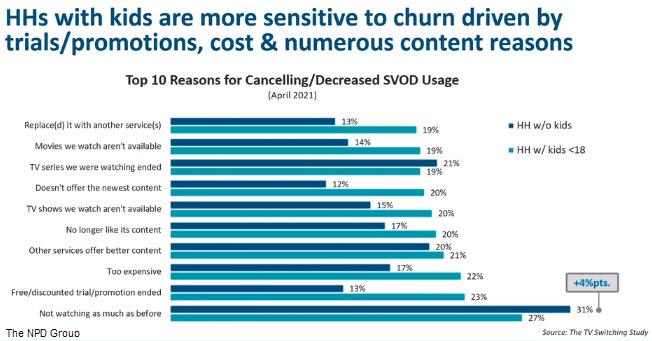 Extreme likelihood to cancel an SVOD service drops from 9% among ages 18 to 34 to 2% at ages 55 and over. The older group is half as likely as the younger group to cancel an SVOD right after the end of a TV series or movie that spurred them to sign up, and one-third as likely to cancel one because they're switching to another SVOD.

However, the older group subscribes to half the number of SVODs as the younger group, and therefore generates less revenue for the industry.

In-theater movie viewing remained significantly below pre-pandemic levels during the first half — in part because of lingering fears of COVID, but also because some viewing was diverted to in-home by film releases on subscription video-on-demand (SVOD) services and the proliferation of new such services, according to NPD.

Shorter theatrical exhibition windows and premium video-on-demand film releases contributed to digital transaction business gains in 2020, and those gains appear to be sticking.

“However, the reduced number of theatrical movie releases limits the flow of new release movies into the ecosystem, so there’s less content available through other video distribution channels,” notes the analysis.

The report is based on an online survey of 5,000 U.S. consumers (ages 2+) conducted in June. Participants were recruited from two representative pools: Adults (ages 18+) were recruited directly and completed questions about their own habits.  Children/teens (ages 2 to 17) were recruited via parent surrogates. Children over age 10 were instructed to complete the survey for themselves (with parental help, if needed). Parents of younger children were asked to complete the survey on their child’s behalf, with the help of the child (if able). Respondents qualified as participants in an entertainment category if they reported that they had personally participated in a relevant activity in the six months prior to the survey.