New For Fall: Will America Embrace Black 'Dynasty' On Fox? 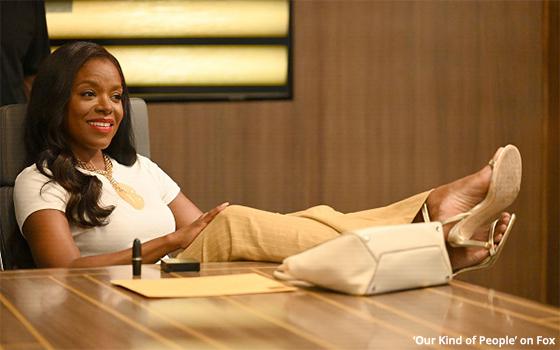 The new fall Fox series “Our Kind of People” -- premiering Tuesday night -- is a drama about the 1%.

But the twist here is that the super-rich in this show are the members of an elite community of African-Americans living in a predominantly black enclave within the larger community of Oak Bluffs, Massachusetts, a town on Martha’s Vineyard.

African-Americans have populated this corner of the Vineyard since the 19th century. And some of the wealthy families living there today can trace their roots on the island back for generations.

Today, the area is a magnet for prominent and wealthy African-Americans, particularly in the summer.

This is the milieu of “Our Kind of People,” which you can describe -- at least for the purposes of a TV column -- as a black “Dynasty.”

It deals with people who possess “Dynasty”-like wealth, power and privilege. It is a show about a long-established class of wealthy one-percenters who just happen to be African-Americans.

It is also a show about class divisions within this community. In addition to the very wealthy, the others classes include a servant class -- also black -- that maintains the homes of the wealthy and serves them their food and drinks.

In addition to them, there is a class of strivers who you might categorize as living in the middle between the wealthy and their servants -- a class of entrepreneurs who are not yet wealthy but who are eager to eventually earn their way into the upper echelon.

This last class is represented chiefly in “Our Kind of People” by a family of newcomers who arrive on the Vineyard just as the summer social season is set to begin. They are three women -- two grown sisters and a teen who is the daughter of one of the sisters.

They have come to Martha’s Vineyard because the two sisters have inherited a building that belonged to their late mother, and the women wish to restore the building and use it as a headquarters for their nascent business as the creators and marketers of hair-care products for black women.

The premiere episode of “Our Kind of People” sets up the show’s many conflicts and rivalries both within the various families and between them.

And, as befits this kind of prime-time soap, it lets us in on various secrets that are closely held by various characters. Certainly, it is not unreasonable to assume that each secret will be revealed in time, with hopefully explosive results.

The cast includes Nadine Ellis (pictured above) as a wealthy heiress, Joe Morton as her father and Yaya DaCosta as the ambitious hair-care entrepreneur who comes to town and shakes things up.

In so many ways, "Our Kind of People" has all of the elements that made “Dynasty,” “Dallas” and all the rest so popular.

But the big difference, obviously, is that this one is about a super-wealthy black community and not a white one.

As such, “Our Kind of People” is the kind of show most people would associate, say, with a network such as OWN, whose lineup of shows has included dramas that are cast from a similar mold.

For Fox, then, putting on a show like “Our Kind of People” might be seen as a bit of a gamble that the racial makeup of “Our Kind of People” and its depiction of a world in which there are no white characters at all (at least in the first episode) will pose no obstacle to its acceptance by both white and African-American audiences alike.

The view from here is that the show will live or die not so much on the demographics of the community it depicts, but on the quality of its contents.

“Our Kind of People” premieres Tuesday (September 21) at 9 p.m. Eastern on Fox.