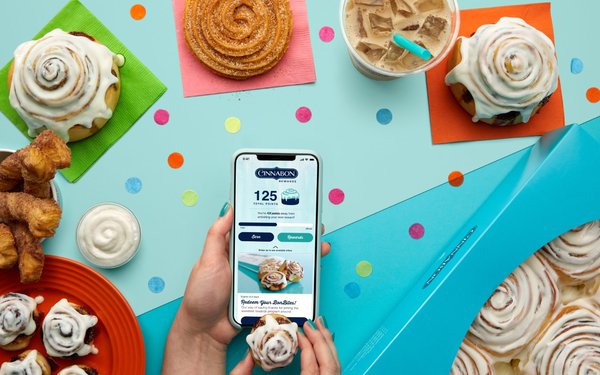 Cinnabon wants its fans to get even sweeter on those sticky buns, introducing its first-ever app and loyalty program.

The chain says the app will offer a rewards program, which will enable contactless delivery or in-bakery pickup with skip-the-line privileges. And while it’s built its business on that signature aroma drifting into the mall food court, it’s now hoping to win more in the digital realm.

Most of the company’s 1,200 locations are located in high-traffic areas, including shopping centers, airports, train stations, travel plazas, entertainment centers and military posts. But in upcoming ads, including its holiday campaign, “we’re encouraging customers to order through the website to get their favorite crave-able rolls delivered directly to them,” says Michael Alberici, director of brand marketing.

It’s promoting the new app with ads running on social media, including YouTube, as well as geofenced display banners and paid search. The chain “is looking to foster its relationship with its most loyal customers, targeting our frequent guests, hoping to give them easy access to the brand,” he says in an email to QSR Land.

Downloading the app automatically earns fans four BonBites, as well as a small Cold Brew on their birthday. And from October 4 through October 10, it’s waiving delivery fees.

And Nicolle DuBose moves to vice president of marketing for Schlotzsky’s, from the same role at Carvel.