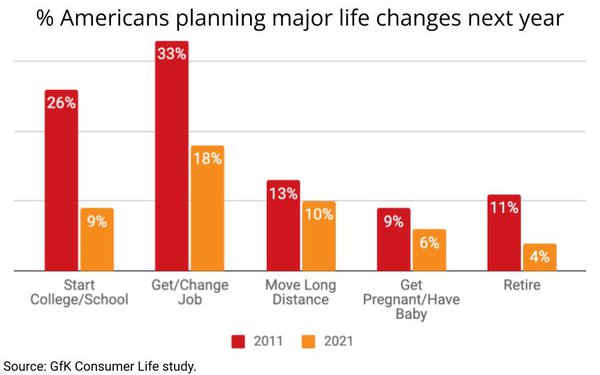 In a finding that has implications for advertisers and agencies in a variety of categories, a higher percentage of Americans say they are delaying "major life changes" next year.

The finding, which comes with the release of new data from GfK's Consumer Life study today, shows a dramatic drop in the percentage of U.S. adults indicating they plan to make big life changes such as going to college, changing their job, moving long distances, starting a family or retiring.

The findings vary by generational cohort, with Gen Zers indicating a higher propensity for changes like starting a new job or going to college, and Boomers more prone to retiring. But overall, there were marked drops in the percentage of U.S. adults planning most changes, with the exception of moving long distances.

He noted that other categories are coincidentally being impacted by supply-related issues, including automotive and health, and that the combined effects create disproportionate uncertainty and continuing disruption for many advertising categories.

"Generally, what happens when we go through periods of trauma in society, is that everyone takes a more defensive posture and backs off consumption. We saw that during the Great Recession," he explains, adding: "What's different this time around is basically how everyone was impacted by the pandemic. It's not just about health, but the economy, work, and consumer lifestyles."

While the crises have impacted all generations (see data below), Wagatha says GfK is keeping an eye on Gen Zers in particular, because research indicates they are more prone to trying new lifestyles than preceding generations.

"They're a different breed," he says. "We think of Millennials as the experiential generation, but Gen Z is the experiment generation. When we interview them they say, 'We want to build things. We want to create things.' I have a feeling this generation is going to navigate this hurdle." 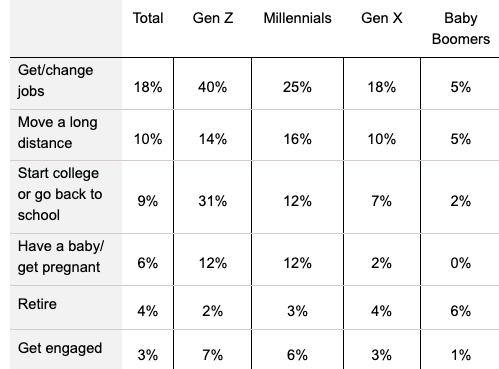