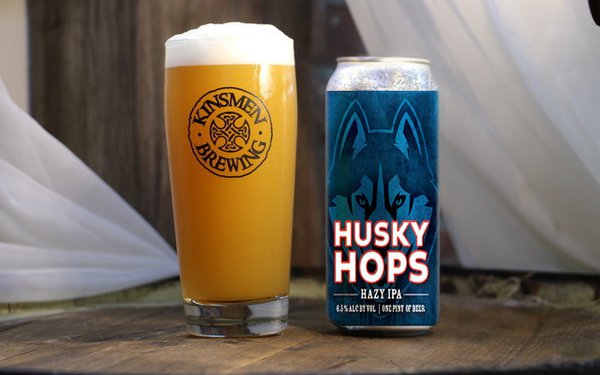 The legal minimum drinking age is 21, most college students are younger than that, and craft brewers are turning to college sports for brand extensions.

The latest example, announced Tuesday: Husky Hops, the result of a partnership between Kinsmen Brewing and the University of Connecticut Division of Athletics.

The new hazy IPA, whose label features a close-up of the college’s Husky dog icon, will be sold at football, basketball and other UConn sports events starting Oct. 16, as well as at on-campus facilities that already sell beer.

All this doesn’t sit well over at another University of North Carolina institution, the UNC Gillings School of Global Public Health. “The rise in partnerships between athletic departments and alcohol companies extends the trend we’ve seen over the past few years toward increasing alcohol sales inside college stadiums,” Department of Health Behavior assistant professor Dr. Melissa Cox told Marketing Daily.

“When a university partners with an alcohol brand, they are sending both implicit and explicit signals of endorsing alcohol use,” Cox claimed. “This results in the campus sending a mixed message to students. Most campuses promote or mandate alcohol prevention messages and programs for students, which contrasts this endorsement of alcohol via branding and sales at athletic events.”

Jim McCune, director of the Craft Beverage Division at the ECG Group ad agency, cited the “hypocritical baggage” of “alcohol sponsorship in college sports,” telling Marketing Daily that “some schools have reported that alcohol sponsorships and concession sales have compromised their own efforts to combat ‘epidemic levels’ of alcohol abuse, and alcohol–related assaults on campus.”

But, McCune explained, “economic pressure compounded by the pandemic has even more colleges and conferences accepting sponsorship bucks from the adult beverage sector. For many athletic departments, it’s just a sign of the times, to stay financially viable.”

The main reason is that “fans are demanding more flavorful, handcrafted beers, and so the selection in these stadiums must reflect their own city’s craft beer culture.” Also, “considering the main issue with alcohol-related advertising during sports is linked to the morality of alcohol abuse, it can be rationalized that craft beer drinkers don’t share mass beer’s persona of overconsumption.”

And finally, “craft beer can be sourced regionally to the event’s location, which further reinforces the locavore movement. Sports fans want to root for their home team (and beer).”

Indeed, you can hardly get more grassroots than local craft breweries tying in with local colleges.

"We appreciate the ongoing support and commitment from Cabarrus Brewing Company, right here in our own backyard," said Jacob Powers, general manager for Charlotte Sports Properties, the university's athletics multimedia rightsholder. "It's even more special to work with corporate partners that bleed the same colors.”

Powers noted that his group has “tools in place to specifically reach alumni and consumers of legal drinking age."

The Marketing and Advertising Code of the Brewers Association, the craft brewery trade group, states that “Advertising and marketing materials should only be placed in media where at least 71.6% of the audience is expected to be of legal drinking age.”

However, while “alcohol companies will profit from these sponsorships and sales, academic institutions are unlikely to, because of the negative consequences of alcohol use on everything from academic success to student safety, including how drinkers can harm other students.” Pamela Trangenstein, Ph.D., a scientist at the Public Health Institute’s Alcohol Research Group, told Marketing Daily,

Trangenstein co-authored a 2019 study, “Collateral Damage from College Drinking," which concluded, “Stronger alcohol policies could benefit all students, regardless of their drinking patterns.”