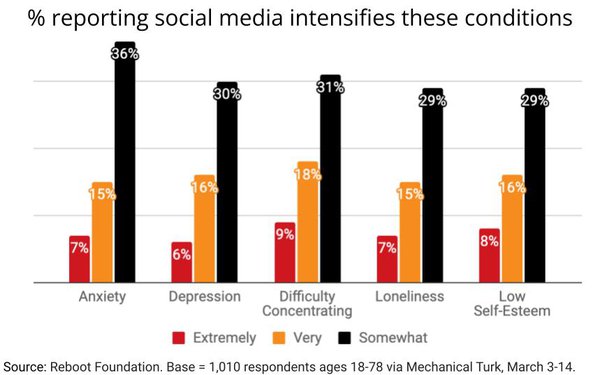 The national concern over social media's health effects has intensified.

A recent article in The Atlantic equated social media to “attention alcohol” and The Wall Street Journal drew a comparison between Facebook and the tobacco industry in its manipulative targeting of teens with a dangerous product. Helen Lee Bouygues, president of Reboot Foundation, identifies these issues as a national health crisis.

Over 70% of those surveyed said they would give up their social media accounts for no less than $10,000, while over 40% of people said they would rather give up their TV, car –– even their pets. When it came to social media's impact on society at large, over 80% reported a “moderate” level of concern, and over 50% indicated that they were “very” or “extremely” concerned.

“It just seems a little outlandish,” remarks Bouygues, “but I think that is the reality that we're living in.”

Bouygues offers a look into this crisis through a critical thinking lens.

In response to the most recent news about Facebook’s internal policies, leaked by whistleblower Frances Haugen, Bouygues believes that it should be no surprise to anyone that social media platforms' algorithms' primary focus has always been simple: keep eyes on the screen.

“Based on that business model,” says Bouygues, “the algorithm of Facebook and other social media is meant to prey on people's emotions. And that is fundamentally the challenge that we have. When people prey on people's emotions, then obviously, naturally, adults or children's abilities to think reasonably and do critical thinking is limited because one of the building blocks of critical thinking is managing your emotions.”

One example of what Bouygues is referencing could be the suggestions and invitations to special interest groups users regularly receive on Facebook. “Over 60% of those that joined radical groups are those that are suggested by Facebook,” says Bouygues. “The whole idea that the social media platform is ‘neutral’...is obviously misleading because there is nonetheless the element of aggregation.”

Bouygues doesn't believe the U.S. is providing enough media literacy or critical thinking training to its population, and that because of this, more young people––middle schoolers and teenagers –– are in danger of falling victim to social media platforms’ manipulative and addiction-inducing algorithms.

One important part of critical thinking involves familiarizing yourself with opposing views.

“Even pre-COVID, one of our surveys showed that over 25% of individuals deliberately avoid confronting someone who has an opposing view,” says Bouygues. “It's human nature because of our insecurities; selective thinking is actually much more comfortable...when in reality, actually discussing and listening and learning opposing views can make you a stronger communicator.”

Bouygues argues that this type of education is important for people to understand their own logic and, therefore, become better consumers of information.

But to truly combat the social media health crisis, Bouygues thinks that education must be aided by public policy and government regulations.

On an individual level, Bouygues believes hazard warnings, like the ones we see on cigarettes or alcohol, should be applied to social media.

“Most people know that cigarettes are bad for you, but when there’s that special warning, it keeps that additional alert going,” adds Bouygues. “I think that's what adults need; it's just a self-reminder about what they're doing that is not neutral, both in terms of their mental health, as well as better consumption of information.”

Bouygues says anything that forces someone to pause improves their general thinking.

“I am a fan of periodic digital detox,” she adds, “but if you are still going to have your biases, if you're still not going to double check your resource, if you’re still only going to click on the first article that appears when you do a search on Google, then you're still going to be a mediocre consumer of information.”

For starters, Bouygues wants the government to enforce large social media companies to fact-check paid content. In line with Section 230 and the Safe Tech Act, she thinks this would help them be more transparent about their algorithms.

Users’ ability to easily consume a plethora of information online can surely be seen as a benefit of the digital age, but “the downside,” Bouygues adds, “is that people really can't differentiate between a blog, a scientific study, an opinion piece -- that is the difficulty of our society today.”

Bouygues and her team plan to study whether there are more conspiracy theories due to the use of social media.