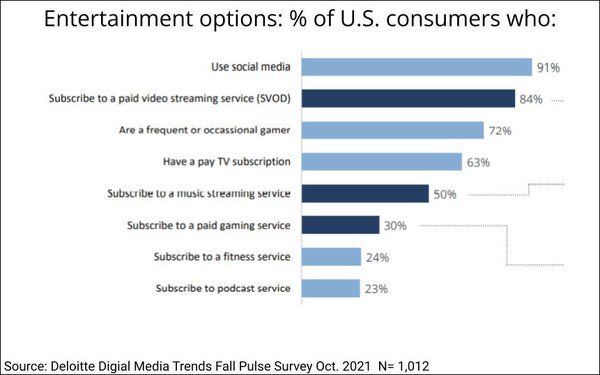 The online survey of 1,102 consumers — conducted by an independent research firm in August, with data weighted to reflect Census data — also found 64%, led by Millennials and Gen Zs, reporting that they watch advertising-supported video-on-demand (AVOD) services.

On the streaming front, the average household has four SVOD subscriptions — largely unchanged over the past year.

The churn rate — the number who have cancelled, or both added and cancelled, a paid SVOD service — has remained stable at about 38%, although it varies by service.

Nearly half (47%) of Millennials and 34% of Gen Zs said they’ve engaged in “churn and return” — meaning cancelling and then resubscribed to the same streaming video service later that same year.

The top three reasons that Gen Zs resubscribed: a new season of their favorite show was released; they routinely cancel and resubscribe to manage costs; or content they wanted to watch moved to the service.

Unsurprisingly, high cost was the top reason cited for cancelling an SVOD service, followed by finishing the show that they signed up to watch.

Many streaming video subscribers say they actively manage costs in some way, such as looking for deals or promotions, buying bundles, or using friends' or family members' accounts.

For streaming video providers, keeping subscribers is harder than ever as people — especially younger generations — are managing costs by adopting ad-supported options, looking for discounts and bundles, and moving on and off services to satisfy their content needs, note the researchers.

But at this point, “it's not just about streaming, or the number of subscribers, but also about how platform providers are responding to subscriber churn by providing enhanced experiences and the ability to connect with others on their platforms.”

"We're seeing an important shift in what consumers are paying attention to and how they are choosing to engage and be entertained,” summed up Kevin Westcott, vice chairman, Deloitte LLP and U.S. technology, media and telecom leader.

“While streaming video will continue to gain momentum, especially with leading services now pursuing global markets, these companies will also need to address churn and retention among diverse segments in different markets, and shift from merely measuring subscribers to understanding how to unlock the lifetime value within their customer bases.”

“It will serve them well in the future to develop growth strategies that include both social video and social gaming, whether through partnerships, acquisitions, or simply establishing a really effective social media department."

Looking at entertainment trends more broadly, with 82% saying that they are concerned about COVID-19 variants, it looks likely that the pandemic has ushered in a permanent shift in behaviors, the report concludes.