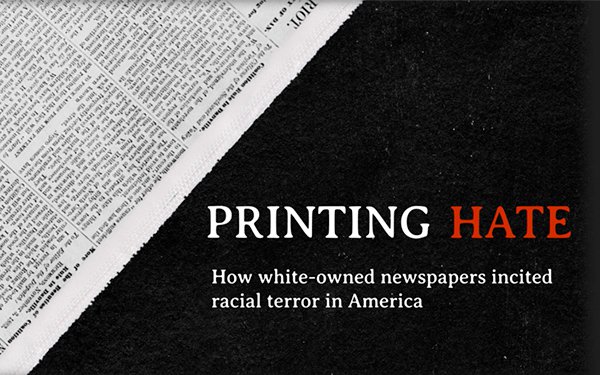 Some White reporters and their newspapers were complicit in lynchings and other crimes against Black Americans in the century between 1865 to 1965, according to “Printing Hate,” a probe by students working with the Howard Center for Investigative Journalism at the University of Maryland.

The year-long research project identified stories and headlines that seemed to celebrate the atrocities, or at least give a pass to murderous White mobs. For instance, there was this sensational report:

"THE ASSAULT ON WOMAN AVENGED--DAVIS DRAGGED FROM JAIL AND LYNCHED--MOB RIDDLED NEGRO RAVISHER WITH BULLETS; HUNG TO TREE ON BRICKYARD HILL AT EARLY HOUR THIS MORNING; BRUTE CONFESSED BEFORE THE CROWD--SAID HE INTENDED TO MURDER HER AS WELL”

Then there were these specimens (warning, they are extremely horrific):

"FRIED OVER SLOW FIRE: Negro Commits the Unspeakable Crime and Is Put to Death With Horrible Torture; MOB GLOATS OVER FIENDISH BARBARITY"

“FIXED FOR A BARBECUE; Preparations to Roast Jim Buchanan, Negro Murderer. Had the Mob Secured Him at Nacogdoches This was to Have Been the Programme.”

“In their headlines, these newspapers often promoted the brutality of white lynch mobs and chronicled the gruesome details of the lynchings,” Howard reports on the project site.

It continues: “Many white reporters stood on the sidelines of Jim Crow lynchings as Black men, women, teenagers and children were hanged from a tree and burned alive. White mobs often posed on courthouse lawns, grinning for photos that ran on front pages of mainstream newspapers.”

The project was inspired by associate professor DeNeen Brown’s reporting on the Tulsa Race Massacre.

These students combed newspaper archives and other sources.

This project is in line with a larger effort going on in American journalism to examine its coverage of race. For instance, ThePhiladelphia Inquirer has undertaken such a revue, and acknowledges that, like many big-city dailies, it has overemphasized crime and been racially insensitive in its coverage.