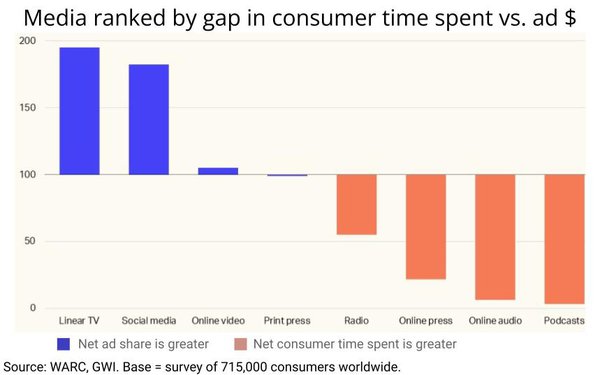 In a report that is bound to stir controversy and debate around a perennial Madison Avenue question -- what's the appropriate relationship between ad budgets and consumer media consumption shares Ascential Plc's WARC (Worldwide Advertising Research Center) and GWI (Global Web Index) have released findings of a global study of consumers purporting to show the ad spending gaps across media, as well as international markets.

The differentials, many industry experts have argued, don't take into account the inherent supply-and-demand dynamics across each medium, which have more to do with communications value, advertising impact and effectiveness, as well as obviously supply overabundance issues.

"The purpose of this report is to assists clients in identifying the discrepancies between daily media consumption and advertiser spend, in order to better recognize opportunities for optimization," WARC analysts write in the introduction to the report.

According to WARC's assessment, the study which is based on a survey of 715,000 consumers across 100 countries conducted by GWI, an over-weighted medium like social media would need to "reduce by $94.3 billion in order to mirror global consumption levels next year, while the investment gap is $86.9 billion for linear TV."

The report also finds that, as of the first quarter of 2021, social media "now attracts more investment from advertisers than linear TV for the first time, however both media draw far more of advertising budgets than the average consumer spends with these channels each day."

As dramatic as social media's overweighting is worldwide, the WARC analysis shows it is significantly heavier in the U.S., according to a comparison between it and the worldwide indexes it developed (see below).

In fact, social media is the only ad medium that has a more pronounced upward gap in ad spending when compared with the global average. 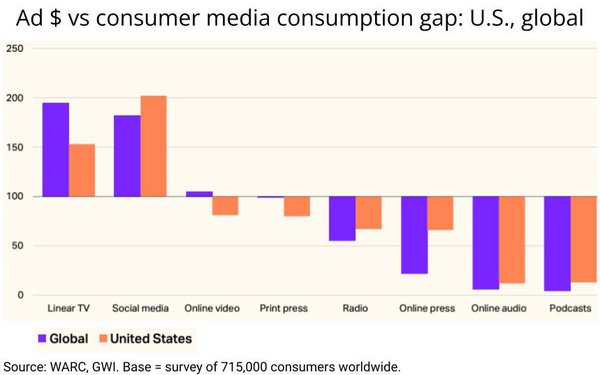