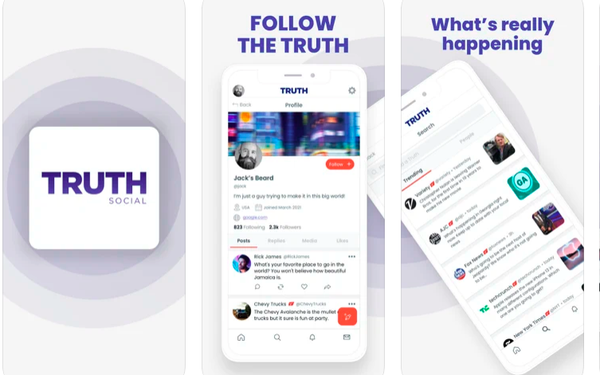 “Everyone asks me why doesn't someone stand up to Big Tech? Well, we will soon!” claimed former President Donald Trump on Wednesday in announcing he will launch his own social media network and social platform, Truth Social.

In May, Trump launched “From the Desk of Donald J. Trump,” an additional section on his existing website, but it was abandoned by early June.

According to a recent tweet by spokesperson Liz Harrington, Truth Social will be Trump Media & Technology Group’s first project.

TMTG says it will list on the Nasdaq through a merger with Digital World Acquisition Group. Harrington said the transaction will value TMTG at up to $1.7 billion.

While Truth Social will supposedly be founded with the “mission to give a voice to all,” Trump quickly stated that he is very excited to begin sharing his thoughts. “We live in a world where the Taliban has a huge presence on Twitter, yet your favorite American president has been silenced,” Trump said.

The app is currently available for pre-order on the Apple app store and will reportedly begin a beta launch for invited guests sometime in November. The venture says it is planning a nationwide rollout for the first quarter of 2022.

Meanwhile, there is already news of “Truth Social” being hijacked.

Michael Thalen, a tech reporter at Daily Dot, tweeted that he “was just able to set up an account using the handle @donaldtrump on ‘Truth Social’...Although the site is not officially open, a URL was discovered allowing users to sign up anyway.’”

In another tweet, Thalen added: “The public domain for what appeared to be the mobile beta of Trump’s new social media platform ‘Truth Social’ has been taken offline.”

Drew Harwell, a Washington Post tech reporter, tweeted that “anyone can create an account on Trump's social network... using a publicly available link. I literally just registered ‘mikepence.’ The site hasn't even launched yet and it’s already this vulnerable.”

According to the app store, Truth Social takes on a “‘Big Tent” approach, a “new way to describe ‘inclusivity’ in America.” It’s a metaphor for the mission statement: “honest global conversation without discriminating against political ideology,” suggesting users with varied views can relate and thrive under this new unified platform.

The platform’s structure seems to mimic Twitter. Users will have a profile, and they will use the “Truth feed” which features posts from followers with “thumbnail photos, links, and more.” There will be a search feature as well as notifications.

The app store states that “this content may change without notice and the final product may be different.”

The press release also stated that TMTG intends to launch a subscription video-on-demand service (TMTG +) that would feature “non-woke” entertainment programming, news, podcasts, and more. Scott St. John, the executive producer of “Deal Or No Deal” and “America’s Got Talent” has been named leader of TMTG+ corporate operations.

For those who decide to register online to receive emails from TMTG, its terms of service require users to sign away their right to file a class action.

The terms of service seem uncertain about advertising, stating that TMTG may allow advertisers to display sidebar and banner ads: “We simply provide the space to place such advertisements, and we have no other relationship with advertisers."