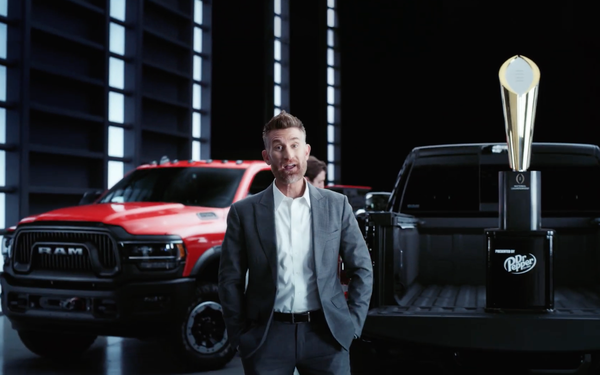 Ram Trucks is partnering with ESPN for an integrated campaign featuring ESPN anchor Marty Smith that plays up its role as an official sponsor of college football.

A 30-second spot breaking today is the “most immersive" effort the Stellantis brand has conducted with the sports media organization, says Jeff Summers, head of Ram Truck brand advertising.

“The truck wars are certainly on,” Summers tells Marketing Daily, referencing the fierce competition between automakers to dominate the full-size truck category. “There’s a lot of people stealing pages from each other’s playbooks. For us, from a creative standpoint, continuing to find innovative, fresh, entertaining ways to bring attention to our trucks is very important and this is another example of us doing that.”

“Winning” is part of a “Built For Tailgating” effort created by Disney CreativeWorks for the automaker. Disney also owns ESPN.

The campaign includes two additional 30-second broadcast videos “Ready to Roll” and “Load Up,” which broke earlier this fall.

“Linear content is just one part of the puzzle” and is the beginning of a long-term campaign, Summers says. “There’s a number of digital pieces, and we’ve done some TikTok hacks. We’ll also do some onsite activation as part of our larger agreement with ESPN as part of our entitlement as the official truck partner of the college football playoffs.”

"For Disney and for ESPN, 'Built for Tailgating' is by far the largest collaboration we've executed with Ram to date," Messina tells Marketing Daily.

The campaign demonstrates to viewers that Ram trucks are not only built to serve, they are also an essential to Game Day. Smith humorously takes viewers behind the scenes while showcasing how every Ram truck is Game Day-ready and able to handle every aspect of tailgating.

"We want to be authentic with our relationships and Marty, Jason and Gary are all Ram fans," Summers says. "Marty and Gary both have Rams, and we're getting Fitz on board soon. [We're] having people who are authentic fans, who are loyal customers, who can speak about the truck in ways that isn't scripted. You might go in with a script, but it's in their voice and it's through a collaboration with the personality that these things come to life. It's fresh, it's entertaining, it's authentic, it's a cross-channel content program that we think is bringing to live everything that's great about a Ram Truck."

College football is making a huge impact on social media right now, Messina says. Total engagement has increased 97% compared to the half way point of 2020 equalling 36.5 million interactions across Facebook, Twitter and Instagram.