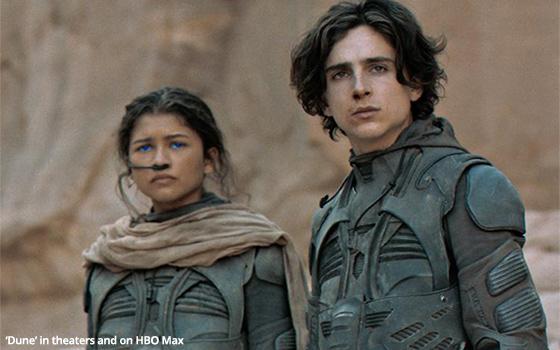 As Warner Bros.' “Dune” returned to No. 1 at the box office for the second week in a row, October became the best-performing month for theatrical movies since the COVID-19 pandemic began in March 2020.

Comscore says October pulled in $638 million in U.S. box-office revenue. The previous best-performing month was July of this year -- $582.3 million, according to IMdb’s BoxOfficeMojo.

Other top earners were returning major hits of the month: Universal Pictures' “Halloween Kills” and MGM’s “No Time to Die” -- went second and third in October with $8.5 million and $7.8 million, respectively.

Japanese animated superhero film “My Hero Academia: World Heroes’ Mission” from FUNimation Entertainment was the best of the movies debuting this past weekend -- at $6.4 million, in just 1,600 theaters.

Searchlight Picture’s “Antlers” was next at $4.2 million, while Focus Features’ “Last Night in Soho” came in at $4.16 million.

Starting in July, movie studios and theaters have seen growing business as pandemic concerns and restrictions have relaxed.

Year-to-date, U.S. box-office revenue has amassed $3.03 billion up 53% versus season-to-date versus a year ago.