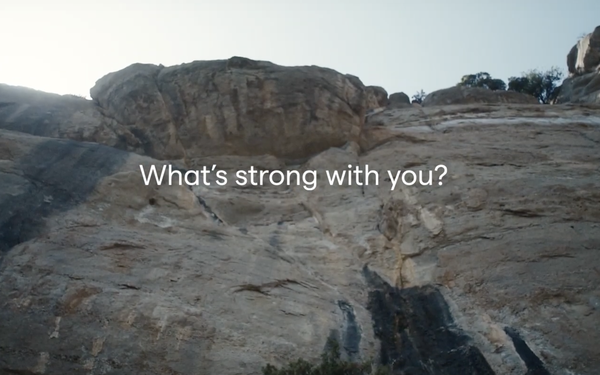 Six months ago, Fitbit’s “Fit Yourself In” self-care campaign aimed to help Americans destress by carving out times for mindfulness and getting a good night’s sleep. Now, six new spots from a brand that once just counted steps ask “What’s Strong With You?” in an effort to help people think of strength as not just physical, but also mental and emotional.

“Both campaigns are part of Fitbit’s strategy to challenge preexisting perceptions of what it means to be healthy and encourage people to think differently about their own holistic health,” said Mark Silverio, vice president, sales & marketing of the 14-year-old company that was acquired by Google earlier this year.

Fitbit is also encouraging consumers to share their own personal strengths on social media with the hashtag #WhatsStrongWithYou.

A few of the new ads include a rock-climbing Sarah Herron, Fitbit brand ambassador and former contestant on “The Bachelor.”

Fitbit has also enlisted a new social media brand ambassador, athlete and self-empowerment advocate Meg Boggs. She doesn’t appear in the ads, but Silverio says she’ll “challenge and encourage Fitbit users, as well as her social followers, to find and celebrate true strength within themselves by caring for their mind, heart and self-image.”

While most of the spots tie in with Fitbit in general, one directly promotes the brand’s just-introduced Charge 5, a tracker for fitness, stress, heart health, sleep and overall well being that costs $179.95 and comes with six free months of Fitbit’s $9.99/month premium service.

The ads also feature an upcoming premium feature, Daily Readiness, that Silverio says will “help users understand whether their bodies are ready for a workout or would be better served by a day of recovery instead.” Each morning, Daily Readiness will provide users with a score based on fitness fatigue, heart rate variability and recent sleep.

“This is the spirit of the campaign,” he concluded. “Strength goes beyond the physical aspects and status quo of buffed arms, ripped abs and toned legs, and covers the mental and emotional aspects of well being, too."