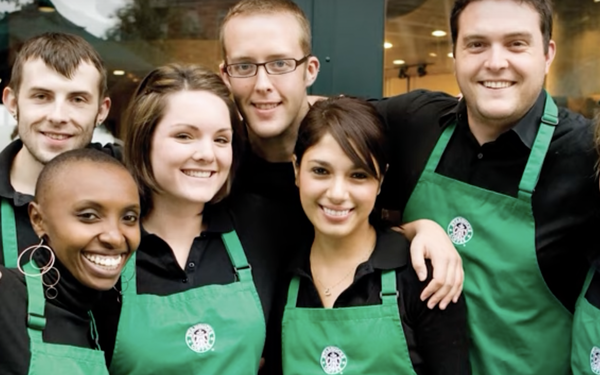 If there’s a common lesson for pandemic-beleaguered, quick-serve restaurants, it’s that loyalty and rewards don’t pertain solely to customers.

A case in point is Starbucks Corp. as the Seattle-based chain celebrates its 50th year (see celebratory video here)  while facing the prospect of some company-owned stores becoming unionized for the first time.

Starbucks is laser-focused on expanding its loyalty program perks as well as employee starting salaries and wage increases.

In releasing the company’s Q4 and fiscal 2021 earnings last week, Starbucks said the number of 90-day-active Starbucks Rewards members rose by nearly 30% to 24.8 million in its fiscal year ended Oct. 3.

The company also discussed payment partnerships with PayPal and Bakkt through which loyalty members can reload their Starbucks card “with a range of cryptocurrencies, including Bitcoin, Ethereum and others by converting digital currencies to physical currency,” president and CEO Kevin Johnson said during a conference call with financial analysts.

Starbucks also said it intends to allow unidentified merchants to “connect their rewards program to Starbucks Rewards” so that the chain’s customers can “exchange value across brands, engage in more personalized experiences, enhance digital services and exchange other loyalty points for Stars at Starbucks.”

Johnson cited as an example a partnership launched earlier this year by Starbucks Canada with Air Canada in which members of Starbucks Rewards and Aeroplan can link their accounts for improved benefits from both companies.

“Over the next year, you will see the first instance of this loyalty points exchange with other consumer brands,” Johnson said.

“This approach will also serve as a foundation for a more aspirational concept for new, modern payment rails that align payment expenses with the value received by customers and merchants,” he added.

Amid an extremely tight national labor environment, Starbucks executives heralded an initiative announced last December in which the starting wage for “partners” (the company’s name for employees) would be at least $15 per hour.

According to Johnson, that goal will be fully accomplished by next summer.

Moreover, effective in January, Starbucks employees with two or more years of service will get up to a 5% raise, and those with five or more years up to 10%, “in keeping with our long-standing history of investing in our partners.”

Not mentioned during last week’s earnings call by either Starbucks or the eight participating financial analysts were the unionization efforts at a few of the chain’s nearly 9,000 company owned stores.

Subsequently, Starbucks assigned two out-of-state “support managers” to stores in New York. As reported by The New York Times, some workers and organizers involved in the unionization effort considered the move a counteroffensive to intimidate workers and disrupt normal operations.

Starbucks described it as a standard company practice, according to the Times.

Last Thursday, the NLRB sided with the organizers in approving unionization voting sessions at three specific Starbucks locations. The chain had hoped for a single session covering the entire Buffalo market, as reported by CNBC.