With New Ads And The Old Parade, Macy's Heads Into Happier Holidays 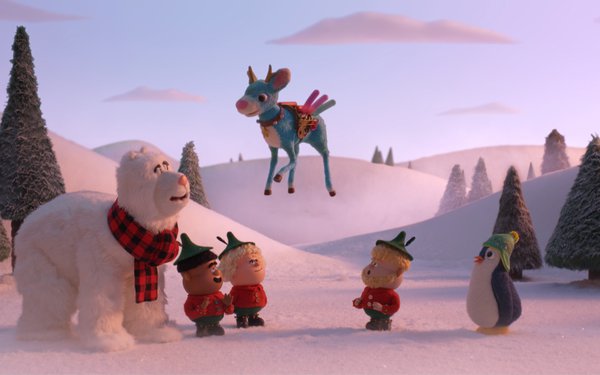 Macy’s is harnessing a new reindeer to its Santa’s sleigh, pushing its “BELIEVE” message to new heights. (Sorry ‘bout that, Ted Lasso.)  And with plans to bring the Macy’s Thanksgiving Day Parade back to its former glory, America’s biggest department store is hoping to put pandemic gloom in Santa’s rearview mirror.

Get ready to meet Tiptoe, an adorable but insecure reindeer who can’t quite find the nerve to audition for Santa’s flight squad. Her pals, a friendly polar bear and well-traveled penguin, give her a shot of confidence by asking the elves to build a Barometrically Elevating Levitation Instigation Engine with Vehicular Enhancement machine. The B.E.L.I.E.V.E. acronym is enough to guide her through any turbulence.

The ad, created by BBDO New York, is airing on TV in a 30-second version, a 60-second version during its upcoming parade, and online and in movie theaters with 90 seconds. Tiptoe’s story is also set to come to life through holiday windows and social media activations, as well as custom Tiptoe plush toys for Make-A-Wish kids and other charities.

Naturally, Tiptoe is getting celebratory balloon status, with her sidekicks earning a place on Macy’s float during the parade.

And while Tiptoe may be the new kid on the block, Macy’s recently unveiled parade plans prove it’s going entirely old-school this year. In its 95th year, the parade is set to include 15 giant character balloons, 28 floats, 36 novelty and heritage inflatables, more than 800 clowns and 10 marching bands. Nine groups are scheduled to perform, and stars include the Muppets, Jon Batiste, Kristin Chenoweth, Sara Bareilles, Busy Philipps, Nelly, Kelly Rowland and Carrie Underwood.

Naturally, Santa Claus is expected as the guest of honor.

The festivities mark a sharp contrast to last year’s radically scaled-back affair, which lasted for one block instead of two miles, and had 130 balloon handlers instead of the usual 2,000 or so.

Besides Tiptoe, new balloons include a Baby Yoda, Ronald McDonald by McDonald’s and Pikachu & Eevee by The Pokémon International Company.

Macy’s is also bringing back its Wednesday evening balloon event on New York’s Upper West Side, where visitors with proof of vaccination can get a closer look at the inflation process.