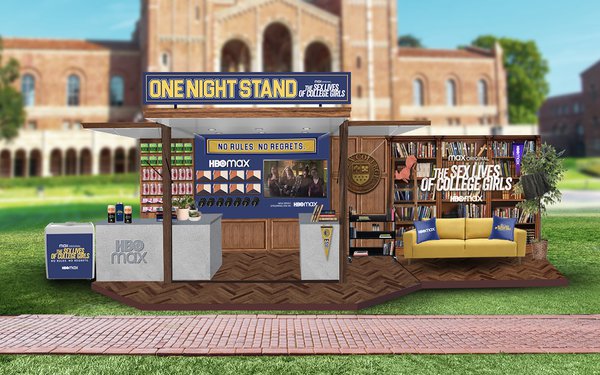 From the “Love Life” of one Black man to “The Sex Lives of College Girls,” WarnerMedia’s HBO Max has launched two creative activations -- “Date Nights” and “One Night Stands”  respectively -- targeting distinct audiences for each streaming comedy series.

“We aimed to produce purposeful events that served as fun, interactive extensions of ‘Love Life’ and’ Sex Lives of College Girls’ while capturing the humor, authenticity, and relatability of the two series,” JP Mallo, vice president of originals marketing at HBO Max, told Marketing Daily.

Each location for the “Love Life Date Nights” included customized food and cocktail menus inspired by characters and events from the show, themed place settings, a “Love Life” neon sign, and conversation cards containing prompts touching on everything from favorite books to perspectives on dating and relationships.

Promotion for the event, which resulted in 185 weekday reservations at the eight restaurants, consisted of push notifications, an online content hub, blogs and social posts.

Mallo called Date Nights a “huge success” that “allowed our fans to feel a part of the series, while also celebrating Black-owned businesses.”

Next up, he noted, will be a “cheeky and light-hearted” activation, “reflective of the dynamic lead characters of ‘The Sex Lives of College Girls.’”

Visitors to the One Night Stand pop-ups, developed with Civic Entertainment Group, will first take a not-so-serious quiz on such topics as their must-have morning-after item (choice of toothbrush, energy drink, sunglasses, mimosas) to the pickup line that would work best on them. That will determine their “on-campus persona,” whether The Curve Destroyer, The Frat Brat, The Flirt or The Hot Mess.

They’ll then receive a goodie bag with such grooming items as Batiste dry shampoo, a WetBrush mini brush, and treats like  SmartSweets and LesserEvil popcorn.

Participants also have the chance to enter a sweepstakes to win a three-night-stay at any Graduate Hotel in the U.S., including round-trip air and ground transportation, plus one pair of Sperry shoes every month for a year, and a box of Glow Recipe products.

For those not on the three campuses, the sweepstakes will be open to all online from Nov. 15 through year’s end.

In addition to the pop-ups and sweepstakes, HBO Max has teamed with the 16 Handles ice cream and frozen yogurt chain to offer an All Nighter Cold Brew Gelato soft-serve through Dec. 9 at 16 locations in New York, New Jersey and Connecticut.