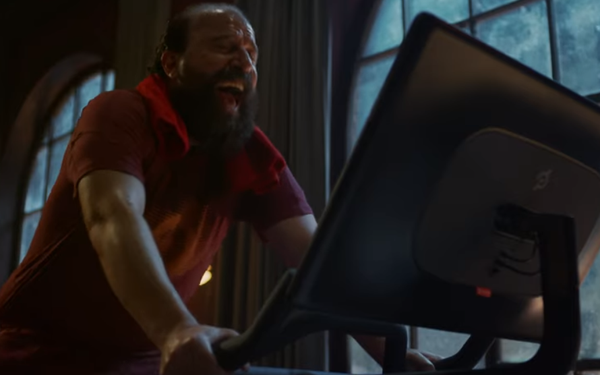 After its widely criticized ad in 2019 that drew comparisons to the dystopian Netflix show "Black Mirror," Peloton is back this season with a new holiday ad that significantly tones down the fear and dehumanization of the previous ad.

The new ad, via Adam & Eve, is based on the conceit that Dickens’ Scrooge gets a Peloton for Christmas, and it greatly improves his mood.

The ad begins by showing that “the town” is filled with joy. We then see carolers amid a snowy backdrop. Of course, Scrooge (played by Bret Gellman of "Fleabag" and "Stranger Things") is a holdout and is shown against a window, grimacing at the scene.

But then, the narrator continues, “the gift of a Peloton bike did touch his soul.” We then see Scrooge happily working out on his Peloton. The ad concludes, “When your workout’s a joy, it’s a joy to work out.”

Thematically, the ad is a major shift from the 2019 ad, which Vox compared to Disney’s "The Nightmare Before Christmas." The arguably dark tone (fueled by the fact that the woman is already in good shape, she appears scared and that her husband gave her this “gift” perhaps fueled by ulterior motives) was fodder for bloggers and tweeters, who were quick to seize on its dark possibilities.

That ad, described by some as sexist and dystopian, was said to have erased $1.5 billion of Peloton’s value. Arguably though, the ad’s negative attention brought more focus on Peloton than would otherwise might have been.

For instance, shortly after the 2019 Peloton ad went up, Ryan Reynolds recruited its featured actress, Monica Ruiz, for an ad for his Aviation Gin brand that showed Ruiz among friends at a bar looking shell-shocked. “You’re safe here,” one says. Then another toasts, “To new beginnings,” as the woman downs her drink.