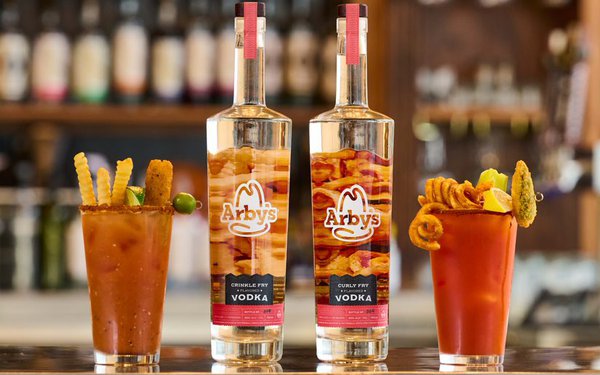 Less than a year since Crinkle Fries joined Curly Fries on its menu, Arby’s has added two more potato-based products: vodka versions of each item.

The new spirits will only be available online for two days -- Nov. 18, and Nov. 22 -- and only to residents of 12 states (including California, Connecticut, Florida, Minnesota and West Virginia). A 750 ml 80-proof bottle will cost $59.99 from ArbysVodka.com, on and the QSR chain wouldn't say how many bottles of the limited-editions will be available.

To replicate the taste of Arby’s fries, Curly Fry Vodka is distilled with cayenne, paprika, onion and garlic, while Crinkle Fry Vodka is made with kosher salt and sugar.

While Arby’s is based in Atlanta, its vodka extension is a three-pronged Minneapolis-flavored affair. The spirits are made by Tattersall Distilling -- whose own vodka is made from corn, not potatoes -- and distributed by Surdyk's Liquor. The third spoke: TV chef Justin Sutherland (TruTV’s “Fast Foodies”) who has devised Bloody Mary recipes using not only Arby’s vodkas but other menu items such as Horsey Sauce. The recipes will be featured in videos debuting prior to Nov. 18 on the social media channels of both the chain and the chef.

Minnesota news site Bring Me The News noted that Sutherland worked with Arby’s last month on the launch of the chain’s limited-time Country-Style Real Rib Sandwich, which the Food Institute has just called a “direct challenge to McDonald’s iconic McRib.”

On the vodka front, nobody’s about to accuse Arby’s of challenging Smirnoff, but the move has a certain logic to it.

“Though we’ve mastered the art of drive-through fries, we wanted to take it one step further by making them 80-proof,” Patrick Schwing, chief marketing officer of Arby’s, said in a release. “Arby’s fans who are of legal drinking age can responsibly enjoy our menu from bag to bottle.”

And Chad Biele, Arby’s manager of brand activation, told Marketing Daily that the chain wants the vodka to reach new customers as well as existing ones. “Arby’s Crinkle Fry and Curly Fry Vodka is an innovative way to enjoy an Arby’s-inspired beverage with your next meal from Arby’s, whether you are a loyal customer or trying it for the very first time,” he said.