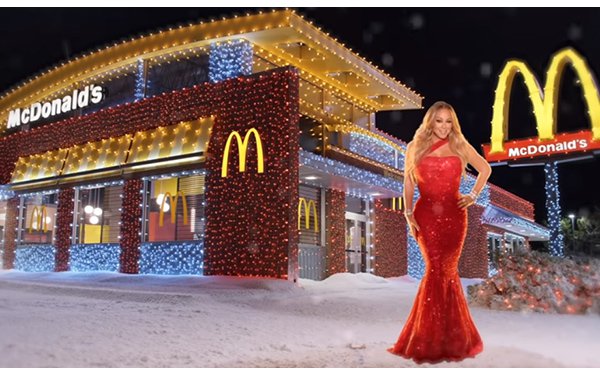 Since then, Carey has become this era’s Bing Crosby, signifying the start of Christmas season for many.

Though Carey has previously promoted Intel, Pepsi and Macy’s, this is the first time she’s partnered with McDonald’s.

In a new ad, via Wieden + Kennedy, New York, Carey promotes “The Mariah Menu” at McDonald’s. The ad doesn’t name the menu items, but mentions the promotion starts on Dec. 13 and continues over the next 12 days.

During that time, McDonald’s will give a free menu item from the Mariah Menu exclusively to those who use the McDonald’s app and spend $1 or more.

The promotion is similar to last year’s holiday effort, whose cast of characters included Buddy the Elf, John McClane from "Die Hard,” Frosty the Snowman, the Griswolds, the Radio City Rockettes, Rudolph and Scrooge.

That version ran Dec. 14 to 24, offering a different item advertised in the spot for free with a $1 purchase through its app.