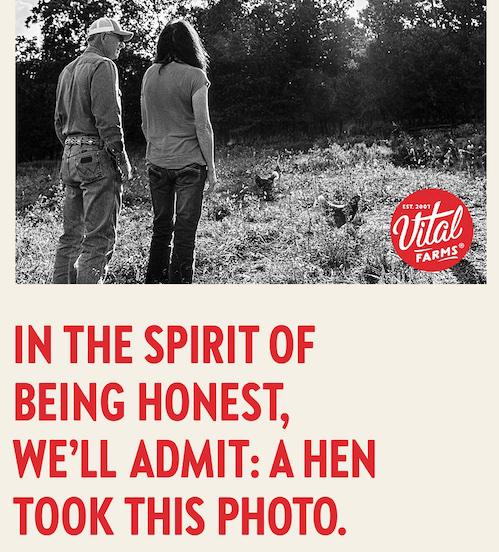 Vital Farms literally put its hens behind the camera so they could help create the egg and butter marketer’s first out-of-home campaign.

“Hens Behind The Lens” is the latest iteration of the pasture-raised brand’s “Bullsh*t Free” marketing platform, which seeks to tell consumers exactly where their eggs originate.

As seen in this behind-the-scenes video from the Preacher agency, hens engage with a custom-built camera via a pressure-sensor platform that activates the shutter whenever it is pecked or stepped on.

First, the hens are asked if they can push a button on a standard camera—but they’re not interested.

With a little bit of coaching, the hens snap a series of photos of their pasture mates that will end up being displayed on digital billboards in Austin, Chicago, Los Angeles, Miami and New York.

The wording on one horizontal billboard says “Our photographers love a wide-angle lens as much as a wide open pasture” while another notes “In the spirit of being honest, we’ll admit: a hen took this photo.”

So what was the hardest part about working with chickens?

“Unlike human photographers, hens don't really have a creative agenda,” Preacher senior copywriter Matt Klugman tells Marketing Daily. “They're curious creatures by nature, so getting them to approach the camera wasn't too difficult. But it definitely took a whole lot of patience and a little bit of luck to get them to waddle over and trigger the shutter.”

Vital Farms chose the OOH locations where visual arts are particularly popular -- as noted above, a list that includes Los Angeles, Miami and New York.

“We wanted to reach a broad number of new consumers in different regions across the United States and run the campaign in markets with thriving art scenes to appear in proximity to photo and art galleries,” says Vital Farms senior brand manager Heather Mace.

The “Hens Behind The Lens” campaign is also appearing on geo-targeted mobile ads.