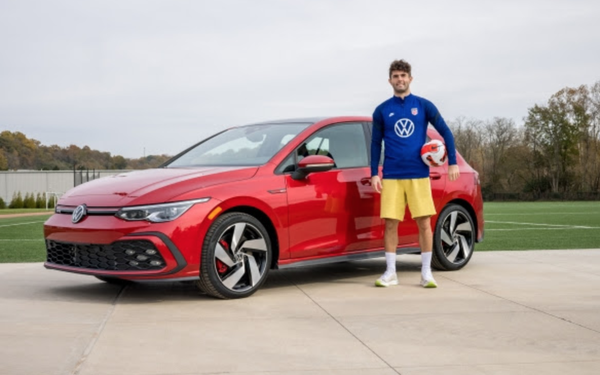 Pulisic has a natural affinity for the brand as his family has owned multiple Volkswagen vehicles and currently have a Golf GTI and Tiguan. His first vehicle was a Volkswagen Polo that he drove while living in Germany.

“His community activism and genuine interest in Volkswagen vehicles like the ID.4 and GTI make him a natural fit for our brand and we look forward to working together on some meaningful projects,”  Kimberley Gardiner, senior vice president, marketing, Volkswagen of America, says in a release.

As the presenting partner of U.S. Soccer, which runs through at least 2022, Volkswagen has been working with the federation and multiple U.S. Women’s and Men’s National Soccer Team players to strengthen the partnership and reach new audiences.

Over the course of the partnership, Volkswagen has continued to aid U.S. Soccer in its mission to become the preeminent sport in the United States through increased visibility, player and coach development, and promoting greater fan engagement across the country, according to the automaker.

Pulisic has amassed a number of accolades both in his professional career and while representing the United States. With the U.S. Men’s National Team, he earned the distinction of being youngest player to represent the USMNT in a World Cup Qualifier, the youngest two-time winner of the U.S. Soccer Male Player of the Year, and the youngest captain in team history.