Kahlua Stirs It Up With Routine-Busting Spots, Espresso Martinis 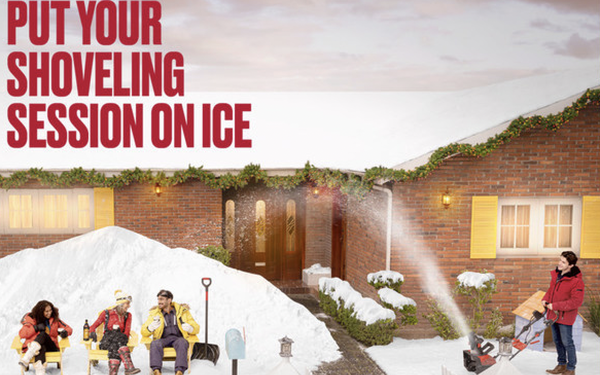 In the first spot for “Stir Up Your Routine,” a new Kahlúa campaign from Ogilvy that will run through year’s end, a group of friends enjoy the coffee liqueur at the foot of what appears to be a snowy mountain. Except it turns out to be a pile of snow created by a snowblower in someone’s front yard.

The “Stir Up Your Routine” campaign also includes Spotify ads, a Pinterest partnership with Food52, and -- coming in early December -- “a call to action that challenges fans to stir up their evening routine,” Rima Sawaya, senior brand manager for Kahlúa at Pernod Ricard, told Marketing Daily.

“We are targeting adult friends and couples who are the social catalysts in their circles and, therefore, leaders in organizing both planned or impromptu get-togethers,” said Sawaya.

A second video spot, debuting later this month, will show a couple turning an ordinary grocery shopping trip into a dancing jaunt down the store aisles.

The campaign, notes Sawaya, “aims to inspire fans to seek out impromptu, playful moments that disrupt their everyday routines and spark more moments of joy.”

Kahlúa is riding a 13.8% YOY sales increase in fiscal 2021 “as cordials became a go-to option for those moments when consumers are looking for an evening treat.” The brand’s product offerings now include the year-old Blonde Roast Style and the two-year-old Ready-to-Drink Espresso Martini.

But the espresso martini is more than just an RTD drink, as it “continues to hold a top spot as one of the season's most popular cocktails, and families across the world are getting ready to host friends and family for the holidays,” said Tamara Urukalo, vice president of global marketing, The Absolut Company, in a statement.

Indeed, Kahlúa is marketed by Pernod Ricard’s Absolut Company, which has just introduced its own rentable espresso martini holiday kit in partnership with D2C party supplies retailer Social Studies. The kit includes a table runner, dinnerware, glassware, candles and votives. It can be rented for $68 per guest, starting at four guests, through Jan. 5.

And there’s a sweepstakes through Jan. 3, whose prizes will include up to 41 winners of a Philips espresso machine, bar cart and more, valued at $1,100 each.