Church's Chicken Wants To Bring Bacon Back To Texas Again 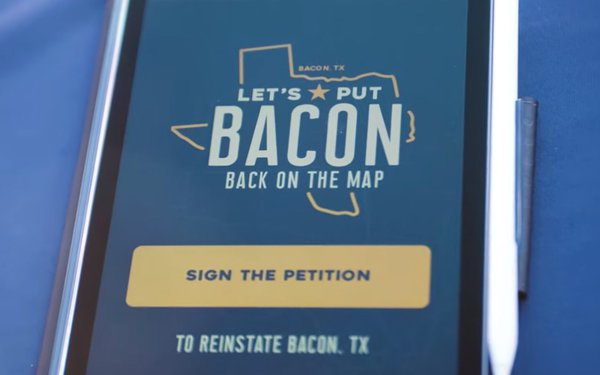 Church’s Chicken has launched an unusual campaign to restore a Texas town’s name to “Bacon.”

And ad anchoring the campaign, from JWT Atlanta, begins with Dusty, “amateur historian,” explaining that the town was originally named for Otis T. Bacon, but 100 years ago, the small town on the Oklahoma border, fell off the map—literally.

In response, the chain is celebrating “putting Texas-cut bacon on its famous hand-crafted chicken sandwich.” The ad then shows a food van that’s on the move and sporting a large replica of the sandwich on its roof.

The ad then directs viewers to bacontexas.org, where they can sign a petition to reinstate Bacon.

The ad comes as Church’s recently hinted at strong results for 2021. In a release issued on June 29, Church’s announced it was poised to turn in another year of “exceptional growth and profitability.” Church’s expects to open 100 new restaurants worldwide, compared with 79 last year.

The company also reported that the average guest check is up just over 30% from 2020 to 2021 and same-store comparable sales are up by about 15% systemwide.

Meanwhile, in the third-quarter (ended late last month), rival KFC said same-store sales rose 6% for the quarter after falling 4% a year ago.

If the campaign is successful, it will follow efforts to change the name of Ismay, Montana to Joe, Montana, in honor of the former National Football League star quarterback, and Halfway, Oregon, to change its name to half.com in 2000 in honor of eBay, which purchased the town for $300 million.