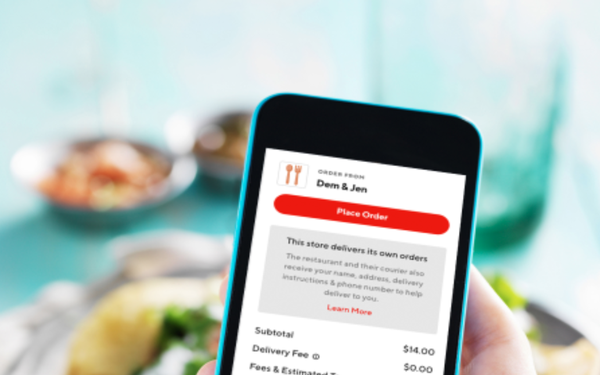 Given the massive rise of food-delivery services, including DoorDash, Uber Eats and GrubHub, it would be easy to assume they’ve become the favorite brands of hungry people everywhere.

But a surprising new report from PYMNTS finds that’s not the case at all: Just 17% of people in its recent research order through one of these food aggregators. The majority prefer ordering directly through the restaurant’s app or website or even -- gasp! -- by phone.

About 44% of the restaurant-goers in the PYMNTS survey used a restaurant app or website to order in the last month, while 42% had done so by phone. And 70% had chosen to dine in a restaurant within the previous three months.

The report says DoorDash is the most popular aggregator, with 58% of respondents saying they had ordered through the platform at least once in the last 15 months. Uber Eats comes in second at 46%, followed by Grubhub, 37%, and Postmates, 20%.

Not so surprising, though, are the sharp generational differences. Younger people are much more likely to order through platforms, including 27% of millennials, 23% of bridge millennials and 23% of Gen Z. Only 6% of baby boomers or older order this way, followed by 17% of Gen X.

The differences turn out to be especially meaningful for QSR brands. When people order their favorite QSR meals through an aggregator, they’re likely to spend at least 10% more than when they order directly. And they’re heavier users, with 13% ordering at least three times per week.

Those who use an aggregator say they do because of convenience. And more than a third use them because they believe it’s the only way to order.

Among those who don’t, the cost is the main objection, with 53% saying they don’t use such services because of fees and higher prices. And 26% say they simply do not trust them.

PYMNTS conducted the survey with Paytronix and focused on 2,200 consumers who’ve bought food from a restaurant in the last 30 days.