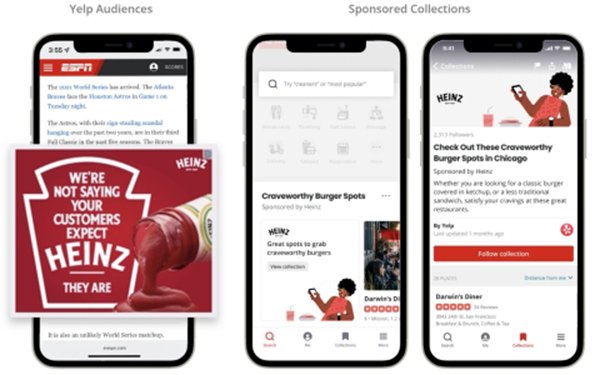 Sponsored Collections -- which appears on the Yelp iOS app home page -- enables brands with or without a storefront to showcase local businesses around a common theme.

The Kraft Heinz Company, an early adopter, worked with Yelp on a campaign that leverages Yelp Audiences and Sponsored Collections. It also focuses on the business owner, which is a first for the brand.

Interestingly, the campaign started as an opportunity for Kraft Heinz to spotlight local business owners in 25 cities that were likely to use or carry its ketchup products.

The company leveraged Yelp Audiences to reach nearly four million Yelp users who were self-identified as business owners and restaurant operators off the platform, based on reporting provided by The Trade Desk. The campaign took eight weeks, highlighting Heinz Ketchup and Philadelphia Cream Cheese. Then it ran a Sponsored Collections campaign in November and December to extend the reach.

Yelp also is working on a version for Android.

The restaurant experiences an incremental lift in store visits with its campaigns for Father’s Day and National Waffle Day, based on its third-party attribution studies.

The plan is to continue the campaign through Thanksgiving, leveraging Seasonal Spotlight Ads to help drive diners to its restaurants ahead of the holiday week.