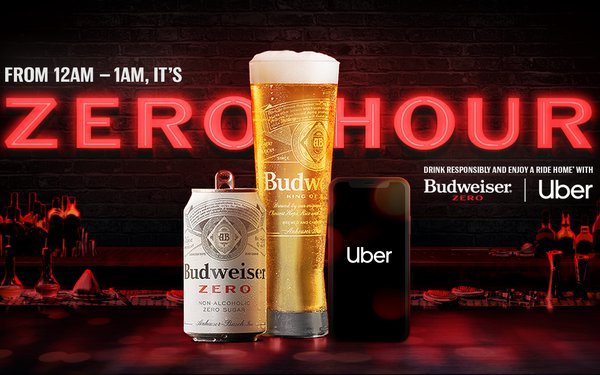 Non-alcoholic beers and spirits would like to become part of holiday traditions.

To bolster its case, Diageo-backed two-year-old non-alcoholic spirits brand Ritual Zero Proof on Tuesday released survey results showing that 58% of respondents feel their family drinks too much alcohol at holiday gatherings, with 48% admitting to drinking more at such events that at other social gatherings throughout the year.

Meanwhile, Anheuser-Busch’s two-year-old non-alcoholic beer Budweiser Zero announced plans to celebrate “Zero Hour” starting at midnight Thanksgiving Eve by providing the brew for free at 115 bars in 83 U.S. cities. An average of 500 cans of Bud Zero will be given out per bar, for a total of 60,000 cans.

Consumers in 30 markets will also get $25 off an Uber ride home if they drink one of the freebies or pledge via social media to drink responsibly.

In another move to encourage Budweiser Zero consumption, A-B has just begun selling the brand directly to consumers in six states, including California and New York, from a dedicated web page (us.budweiser.com/zero).

The Ritual Zero Proof survey -- of 2,000 people 21+ over a three-day period in late October -- also found that nearly 70% of respondents feel too much booze is served at holiday office parties. Seventy-four percent said they purposely limit their alcohol intake at such events.

Among other results, more than 60% of respondents said “there's always a family member who takes things too far,” with one-third naming an uncle as the person most likely to “drink too much and do something shocking.”

Sales of non-alcoholic wine, beer and spirits have been growing rapidly, delivery giant Drizly noted recently, although the category still accounts for under 1% of all its sales. Data analytics firm Statista pegs sales at some $414 million annually, with expected growth of 5% through 2026,  Drizly added.

“Younger consumers such as those in the Generation Z and millennial groups are propelling the NA [non-alcoholic] trend forward,” Drizly said.

In the spirits category, Drizly said that Ritual Zero Proof and two other brands -- Seedlip and Lyre’s -- dominate the market.